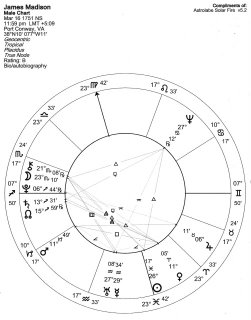 Here's the natal chart of James Madison, Architect of the Constitution.

We see idealistic Sagittarius rising, with Saturn in Sag--he had frail health his whole life, and stood 5'6", yet he lived to a ripe old age, hemorrhoids and all. And, of course, the Virgo/Pisces axis always relates to health issues--Sun in Pisces is not the most vital place for the Sun, is it?

As "the Architect", we expect to see Taurus emphasized, and with Jupiter's placement in Taurus, we see expansion in business on a large scale, love of luxury and indulgence--a gourmet, in fact (leading to hemorhoids?), and a tendency to go on holy crusades.

Chiron in Scorpio brings death crises, and occult interests and talent. Participating in Freemasonry apparently filled the bill, as you might expect, and an early life full of health concerns made Death a familiar companion for contemplation.
Just the era he lived in, and the work he and his colleagues were about, would bring these issues to mind daily. And you see Pluto on Ascendant...if this is his correct birth time, his very birth was an iffy proposition, it would seem--death issues from the start.

Chiron conj Moon places high value on family, and shows an idealizing of the homeland, and on meeting the needs of the public. There's a marked patriotic emphasis, and a tendency toward perfectionism--all of which were obviously used in his writing and editing of the Constitution, and in his public, political life.

His intellectual brilliance with a scientific bent can be seen with Mercury conjunct Uranus, the planet of creative inspiration from On High, and both in Aquarius, sign of the Waterbearer--the Water of Life. Mercury/Uranus is an independent thinker who will not accept ideas simply based on tradition, and so they arrive at original solutions which others have overlooked.

Mars exalted in Capricorn gives him much professional ambition and a desire for high status, while his Taurean Jupiter in 5th house of Romance/Speculations attracts a high status mate...Dolley Todd. Her branch of the Todd family is connected to the Collins family, both of which are known for their centuries-long Freemasonry and/or Illuminati involvement. You go, Jemmy, the Fredrickburg Lodge is just a horse ride away. (But this Lodge with its records destroyed long ago.)


So President Madison will be 255 years old on March 16, yet his soft voice still whispers to us in 2006, for in 1834, although crippled with old age, he penned his last words to America--to you and to me (The Sheeple, it seems):

"The advice nearest my heart...is that the Union of the States be cherished and perpetuated."

And yet so many will let him down--if We-the-Sheeple let them.