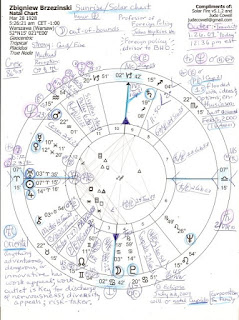 Image: March 28, 1928, Warsaw, Poland, sunrise 5:26:21 CET (-1:00), Hour of Venus; Sun in Aries, Moon in Cancer the 24 hours through - from 00Can11 to 13Can50 (which conjuncts US natal Sun.) Outside the chart you may notice my scribbled notations for the planets of 1.26.09 in pink, with an important transit afoot to his natal Mars 22AQ01...Neptune has been dancing about with ZB's Mars, planet of energy, action, and the desire nature. Neptune to n Mars is a time of taking inspired - or veiled - actions; energy and health may be undermined. Frustration and being misunderstood over goals or methods are typical with this transit; deceptions and illusions may accompany efforts. Actions can miss the intended target yet hit one just as good, but impractical or unrealistic enterprises may be on the agenda. This transit activates his natal Mars-Neptune opposition (see details below.)

Being sunrise, you see ZB's natal Sun ascending along with rebellious awakener, Uranus, as his oriental planet (rising last before the Sun.) As I've notated in the lower left corner of the chart, an oriental Uranus indicates one who requires things to be adventurous, dangerous, or innovative in the work situation; having work as an outlet for nervousness discharges it; diversity appeals to this risk-taker. (Tyl.)

Sun conj Uranus denotes an erratic eccentric who doesn't care what others think of his behavior (Uranus's sign = how we behave. He behaves as a Mars-ruled Aries, and with Sun in the zodiac's first sign, he IS an Aries.) Having natal Uranus in Aries, sign of the pioneer and Utopian zealot (Ebertin), shows one who must break down old structures to make way for the new which is perfect for radical political and social reforms and social tinkering with tr Pluto plodding toward Capricorn over the next few years.

The closest applying (only applying) aspect to natal Sun is a conjunction with Jupiter (7A01 at sunrise) so there is an expansion of ego and an arrogant know-it-all flavor to the solar personality. Mr. B possesses a boundless enthusiasm and much faith in himself. The broadened horizons of long distance travel, and many fortunate breaks come his way through this conjunction. We may also consider the Jupiter-Uranus = Sun midpoint picture with potentials such as: Illumination of one's best position in any situation; great success; individuality in full bloom; far-sightedness; a good intellectual grasp; an inventive mind; mobility; optimism; knowing the best will happen; fortunate twists in the way things transpire. (Tyl: Ebertin.)

(Now I won't include the midpoint conjoining this Ascendant since it's the sunrise (solar) chart and is similar in nature to the above pic which is in effect no matter his birth hour.)

One of this global elitist's more telling aspects is a square between Jupiter and Pluto (0A43) which indicates that he rebels against existing codes of ethics and challenges authority in his efforts to find easier routes to his goals. Dick Cheney was born with a Jupiter-Pluto square, if that tells you anything. One of the greatest problems with this square (90 degr) is a proneness toward expecting large returns from small investments - here is a wheeler-dealer supported by his risk-taking Sun-Uranus conjunction. He may exaggerate his burdens in order to justify an unwillingness to accept responsibilities, and may be misguided in contributing too much to questionable enterprises. ZB leans toward large-scale enterprises which affect many people and from which he expects substantial returns yet Fate may tempt him to seek out risky schemes that run into legal difficulties.

Money-lending, political maneuvering, and professional gambling are possible interests for a Jupiter-Pluto square personality, but exploitation of others will eventually come back around to him in karmic fashion. (Robert Pelletier's Planets in Aspect.)

His Jupiter trine Saturn is called the banker aspect by Alan Oken; here we see a man who can learn lessons from past experience and integrate them well into future goals and plans and this helps mitigate the negativity of his Jupiter-Pluto square (if he's aware of this and wants it to.) Success is simply expected, and made more sure by his having access to useful information others may not possess - and he's a master of evaluating the data received. Ah yes, the global elite class of high-and-mighty win-winners, many of whom are simply swindlers and world class crooks!

Yes, self-faith is high with a Sun-Jupiter conjunction, and an innate talent for self-dramatization aids his public appearances. ZB can be a catalyst for the development of other people's talents and the words, mentor and acolytes come to mind. As you see, around the chart in pink: tr Pluto is at MC, although this is only his solar chart...his true MC we do not know. But for ego needs and recognition, for true purpose queries, and for info on the native's hero's journey (Sun = adult consciousness; life goal), the solar/sunrise chart is fine...it's still a snapshot of the planets' positions at one's birth, but is like a photo just slightly out-of-focus.

Now, natal Mars opposes Neptune (4A47): uh-oh! Here is a thespian who is eager to please, yet others may often doubt that his motives are sincere. Perhaps an amount of honesty is lacking concerning actions and motives which arouses a sense of suspicion in associations. In fact, it's what he doesn't say that later incriminates him. Folks with Mars-Neptune oppositions have desires that can border on uncontrollable, and his Mars-Uranus = Venus midpoint picture echoes this passionate excitability, but it may serve to unnerve people or cause others to feel threatened in some way. Alcohol and other drugs, and the occult should be avoided for there is an over-susceptibility here. Realization and acceptance of reality is a must along with learning to relate to others on an emotional level with Mars opposing nebulous Neptune.

Additionally, it's best if Mr. Brzezinski avoids a career with any hint of illegality to it, but I suspect that horsey left the political barn decades ago, don't you?

In progressions, ZB in in the Balsamic phase when good-byes will need to be said...his Secondary Progressed New Moon occurs on or about Nov 30, 2009 at appr 26Gem22.

Well, there it is: my version your Meet Zbigniew Brzezinski introduction...how do you like him so far?

Fascinating analysis--I'd thought he was gone from the national scene--I guess that's why I'm not in charge! Thanks for such an illuminating assessment of someone who could play a big role in our future.
Julie D

Thank you, Julie, you're too kind. Glad someone read the post concerning this 'scintillating' character.

For a while longer we have ZB and pal Jimmy Carter around fronting for whatever entities they represent. Makes me lust in my heart for a better world but not the one designed by ANY politician - by nature a self-interested beast!