David Icke covers pretty much everything in this 32-minute video presentation including George Soros and MoveOn.org trying to co-opt the Occupy Wall Street movement for World Government purposes.

Mr. Icke explains how the current monetary system = enslavement and how necessary it is to wake up to how the global financial system is actually run and how it perpetuates itself with money created 'out of thin air', as most people now know if they didn't before. Once usury interests rates became widespread, it's been a downhill slide ever since for debts can seldom if ever be paid off or 'satisified'.

Then when one's employment is lost and a home mortgage amount is much higher than the plummeting value of the property--the Neptunian "underwater" condition so prevalent today--banks confiscate real property such as houses, even though the money they loaned the buyer was merely a mirage.

Astrologically, the mortgage miseries and life-destroying, fraudulent banking practices--scams!--were emphasized when transiting Saturn (loss, delays, restriction, control, authority) conjoined US natal Neptune @ 22Vir25 on August 27, 2009. Neptune is our solar system's gaseous planet and Astrology's signifier of dreams, visions, inspiration, and the American Dream (which apparently involves work since Virgo is the sign of Work, Service, and Health, all realms of much Neptunian confusion and deception in the US.)

Saturn to natal Neptune is the 'grim reality' transit when hopes are depressed, yet if through the years Saturnian principles have been honored in life, there is little grimness or loss but more of a 'dreams into reality' vibe to this transit. People signing subprime loan papers were often deceived for they actually qualified for better deals. But if they had been honestly treated, racketeering banks and bankers would have made less profit so...money talks. You know how it is. It's called exploitation and may be described in part by the combination of Pluto and Chiron as: Plutocracy (what the US government is.)

So although our presidents change, US policy, as directed by the global banking cartel, proceeds along the well-worn, long-planned path to Global Governance, the ultimate bugaboo of centralized power.

Now there's another recent, longer-lasting transit to the US natal horoscope, and with Neptune back in Aquarius, the orb became closer again. Once Neptune re-enters Pisces for the duration and lumbers beyond 5 degrees of US natal Moon (27AQ10 in the Sibly chart, as early in the Zodiac as 18AQ+ in other versions, which makes the Sibly--5:10 pm LMT--seem the more plausible US natal chart because dissolution continues), the mortgage crisis will begin to lift in earnest...barring some unforeseen emergency or interference from On High (such as a 'plan' from the World Council of Fatcats and Bossy McBosses.)

Delusional Neptune to natal Moon (we-the-people) brings in its oceanic wake fraud (to the people), loss and dissolution, lies (including from the media--Neptune rules the media), flooding, storms, and confusing, chaotic, hemorrhaging conditions. Refugeeism and homelessness become more probable during this transit with the Moon ruling Cancer, sign of The Home.

For comparison, the earliest US natal Moon I have in my files is the July 4, 1776 chart set for 2:21 am LMT (or 2:22 am, in numerological fashion.) The Moon is near Mc 15AQ29 (Mc = WHY? For, by, of the people!) @ 18AQ14 which would indicate that Neptune's passing from orb of we-the-people is nearly accomplished yet we know from events that the danger, disillusionment, losses, disappointment in our system and fraud by the fatcats running it--are not yet over.


Transiting Neptune to US natal Moon, if @ 18AQ14, occurred 3x during Bush's term:

Now financial and social conditions in the US were ripe in early 2006 for the crescendo of events to burst forth in August and September 2008, I agree. But given the current state of things on Wall Street and atop other ivory towers of global power, the dates for Neptune to 28AQ10 seem to be trending more in line with ongoing conditions in 2011...

Why, even our Secondary Progressed Moon has been in Virgo where Luna conjoined natal and progressed Neptune as John Townley wrote in his October 2010 article America Is Neptuned Out.

However, our Sec Moon is within their midst and completing a progressed midpoint picture...

This picture spotlights the problematic Mars/Neptune square in America's natal horoscope and national psyche with both the confused, deceptive motivations and inspired actions that a Mars/Neptune square so often indicates. Plus, it attracts unsavory characters and below-board associations, you know. 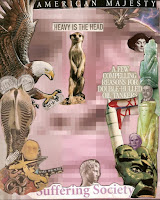 For both of you David Icke critics, you'll be glad to hear that no reptile people, monsters, or UFOs were detected within this particular video presentation. Thankfully. jc

Written during our wet-blankety Saturn to US natal Neptune times: American Dream Awakes. Of course, it's the Uranus to Aries Point (and US natal Ic in the Sibly chart) that's supplying much of the anarchy and revolt vibes now prevalent within the collective and which became exact the first time in Spring 2010. With the sign of Uranus always describing a generation's manner of behavior, we see Uranian progressives taking action against the status quo (Saturn) of The System in determined attempts to pry the oxygen tube--and resources--out of the beast's cold, grasping claws.

When the cycle of Jupiter (expansion) and Saturn (contraction) is at its opposition stage of culmination-fulfillment, it's time for moneybags Jupiterians to give back some of the largess they've received the last ten years, often through little or no effort of their own. Willingness to cooperate with such an immutable universal principle determines whether motives are shown to be for purely selfish reasons and not for the Greater Good at all.

Another facet of Uranus in Mars-ruled Aries is that of what may be called 'quixotic Utopians', the chaos-creators of 'vision' who think they know better how other people should live and love. Meddlers! Your so-called Great Plan s*cks, btw.

Most people have noted that today's world is trending 'local'. As for NWO types, we don't need any of their jive turkey 'central/global government' rulership (dictatorship) over Earth's peoples made up of various cultures, languages, and environments.

And our thespian politicians?

It's time for all masks to come off and true allegiances to be declared. For even in Washington DC, the day grows very late for their lying oaths and cruel code words of betrayal.
Posted by Jude Cowell at 10:02 AM