Here you see dual images of the October 12, 2015 Libra New Moon and the Taurus Full Moon of October 27, 2015. Both charts are set for Washington DC (as usual--this is Stars Over Washington!) and have a few of my scribbledy notes penned on. Please enlarge the image for best results: 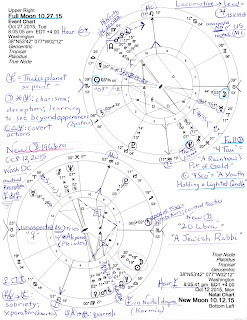 As you see, the Sabian Symbols of the Sun and Moon in both charts are notated with the New Moon at the "A Jewish Rabbi" degree. This New Moon falls upon US Progressed Mars Rx and with radical Uranus in Mars-ruled Aries opposite and denoting zealots, potentials for a new phase in military and political realms are shown. It's a Mercury Hour with the planet of communications, news, deals, trades, and young people at a karmic Nodal degree indicating important meetings and encounters. The trio of planets in Virgo (Venus, Mars, and Jupiter) share the sign with the current (Sept 13, 2015) Solar Eclipse in the 18 North Saros Series with its themes of 'a high level of stress and an overtaxing of strength' (Brady.)

The October 27th Full Moon perfects upon the "A Rainbow's Pot of Gold" degree (the 1977 discovery degree and symbol of Chiron), and the Illumination Point opposite is where the Sun shines at "A Youth Holding a Lighted Candle" degree (THE POWER OF SYMBOLS--Rudhyar, and having a devotional/religious vibe.)

With the 7th house Saturn @2Sag06 denoting religious types and/or emigrants (Sag) positioned at the apex of a T-Square involving the Venus-Neptune opposition (Venus-Neptune is also a religious signature especially in the arena of pagan goddess idolatry as found in the Vatican), we find that ambitious Saturn, a karmic planet, is determined to control others as he reaches toward goals with tactics which may become abusive.

So it seems to me that with Saturn and Uranus involved with both October 2015 lunations and considering their traditional links to Israel and Palestine, a process is being described by the charts and lunations which include the deeper meanings within the Sabian Symbol word pictures for Sun and Moon. We may even expect compassionate or deceptive Neptune in its own sign of Pisces to play a role as Thales planet (or point) between the Full Moon tension and awareness which will be reached before the end of the month and expressed across the 6/12 victim-savior axis.

You'll find brief details of spiritual Neptune's Thales influence listed upon the left side of the chart though I leave it to you to decide which issues may be affected or benefited; they may include: hospitals (Doctors Without Borders? healthcare? abortion?), back door deals in Congress (new Speaker Theater? Campaign 2016? funding, debt?), the military, police, and/or civil officials (government shut down? police state? troop movements?), religious leaders (rabbis, popes, religious presidential candidates?), and other concerns in the 1/7, 2/8, and 6/12 realms.