July 13, 2020: Just a quick posting of the New and Full Moon DC Horoscopes for July 20 (28Can26 opposite US Pluto - and July 20 is the 3rd of 3 Mercury Returns for Trump to 8Can51), August 3 (11AQ45; prominent is the Mercury-Saturn opposition which suggests not wanting to hear what's being communicated and dissenting opinions), and August 18, 2020. Study notes are penned on the charts if you care to read them. We should mention that the natal Mars of Uranian Donald Trump will be activated on August 18th by a New Moon @26Leo35 - and New Moons can disrupt in similar Uranian fashion to Solar Eclipses: 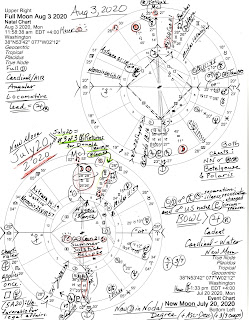 Image below: As you see, Mercury the Messenger accompanies the August 18th New Moon and, if you're familiar with the natal horoscope of Trump, you know that Mercury @28Leo07 closely approaches his natal Ascendant which to me suggests the usual - that what he thinks and says is 'on the line' and/or open to scrutiny. Of course, with his natal Mars in egotistical, pompous Leo nearby, his actions are implicated as well, while the dark of a New Moon suggests secrets, scandals, sneaky activities, but also possible revelations and leaks. (Mary Trump's book is released tomorrow as I type so more info from her account of the dysfunctional Trump family seems a given.) 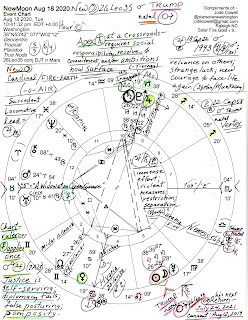 As you see, on August 18th, chart-ruler Venus applies only once - to oppose Jupiter - two money planets at odds, it seems. See lower left for my notes which include 'justice is self-serving', something we already know about Trump and 'his' DOJ, don't we? In fact, the August 3rd chart shows asteroid Astraea ('Justice') opposing deceptive planet of fraud and corruption, Neptune in sneaky, infectious Pisces! And though I neglected to pen it on the August 18th chart, Astraea by then will be at a critical-crisis 29th degree but still in analytical Virgo. In a day or two Astraea will reach 00Libra and in the founding horoscope I most often use for America, Astraea will conjunct the Midheaven ('MC'), The Goal Point of any chart - and that's Venus-ruled Libra, sign of the Scales of Justice!

Additionally, it may be significant that the July 20th New Moon @28Can26 points toward a symbolic cosmic event on August 20, 2020: The Progressed Full Moon of the DOJ! Of course, DOJ's SP Full Moon also opposes US natal Pluto in Capricorn so we know that titanic power struggles continue within and against our corrupted Justice System. My suspicion has been that financial pilfering is a part of fraudulent DOJ activities along with foreign raids on the US Treasury. And that's not even counting Congress and shady, dishonest corporate CEOs and Ivanka!

So the July and August 2020 Lunations reveal an America continuing to struggle against the winds of change while quarreling with ourselves and each other. Meanwhile, the transit of restrictive Saturn to US natal Pluto (Saturn Rx backed into Capricorn again) extends a period of power struggles and control issues when situations are simply too large to handle for now and re$ources are depleted (some stolen, some put to good use). Mature, authentic leadership would help immensely - see 'apex Saturn' notes on the August 18, 2020 chart, upper center, but we're having to wait a while longer for what may hopefully be a change of administrations that will bring in a Cabinet of folks who actually know how to govern; otherwise, we'll have to settle for the violent melee and mobsterism that Trump and his comrades are determined to continue forcing upon the American people as they attempt to keep him in office.

And with warrior-activist Mars strong in fiery Aries in the 6th house of Military, Police, and Civil Service in both the July 20th and August 3rd charts, it appears that We The People may need to depend upon military action to eject the blighter from the White House if our dream of a massive Blue Wave washing him out to sea comes to pass in November. Because with sociopath Trump backed by a criminal syndicate of global thugs, a simple loss at the ballot box on November 3rd could never be enough for him to take the hint and make like a leaf.

As you know, the month of July 2020 began with the 'cosmic blink' of a wild card eclipse: Capricorn Lunar Eclipse on July 5th opposing US natal Sun (POTUS) but is not listed, above, since it appears in a previous post.

yes many of us fear that the orange hitler will simply use the DOJ to claim millions of Mexicans voted for the dems or some such crap .. as i know you've taken time to look at it ,i'm curious of your take on the inauguration chart 2021 ... At first because of the Sun Saturn Pluto conjunction around the MC square we the people moon mars Uranus conjunction , I assumed that it would be a stolen election & the people are angry with revolution brewing but knowing how aggressive trumpians are in their obsessive support of their furor & that no matter how much he lost by or whatever trump would claim a deep state conspiracy & would no doubt embolden his zealots to violence , that they the trumpians could infact be the Moon Mars Uranus ???
i admit to me the sun saturn pluto seems more trump but as astrologers we have made the mistake before of associating Uranus with a more lefty revolution when clearly since trump we all know Uranus can be extreme & brutal right wing ..if you have time your thoughts would be appreciated .

TY for your thoughtful comments zeebling. You have spotlighted the topic I've been avoiding for some time for the Inauguration 2021 Horoscope is complex and disturbing. Twice I've begun a post for it but have demurred yet one must be published asap - and your interest encourages me. One thing I will say now is that in 2017 only the POTUS Sun was in 10th house; in 2021 it's Sun-Saturn-Jupiter-Mercury in 10th which seems difficult to see as loner Trump - more like a Biden Cabinet! Other indications (such as 12th house Moon @29th degree with Mars conj Uranus) will be added of course, however, it's possible I will manage to publish first on the New Moon prior to January 20, 2021 for its chart contains some bright spots! And we need all those we can get these days, yes?

Thanks again for reading and taking the time and effort to leave your on-topic comments! Jude

Yes its so complex ..i keep switching positions ha ha ...look fwd to your article