May 26, 2021: Below is a DC Horoscope of the upcoming Great Conjunction of Jupiter and Neptune @23Pis58 on April 12, 2022 (in 9th house when the chart is set for Washington DC). Perfecting at 10:43 am edt, we find 4Can29 rising with US natal Venus and Jupiter which gives a pleasant air to the entire chart and conjunction. The Cancer Ascendant makes the fluctuating Moon the chart-ruler and, lower left, you see the two applying aspects that Luna makes with messenger Mercury, then evaluating Venus. These aspects suggest potentials for restlessness, successful communications, but perhaps a few uncomfortable social situations: 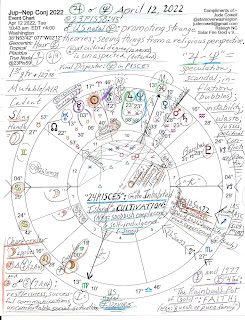 At Midheaven ('MC'; the Goal or Aspiration Point) is 13Pis10 which handily brings the bubbly, cheery, speculation-inflation pair of Jupiter and Neptune to the cosmic party - here joining forces in the very visible 10th house of Career and Public Status. Apparently, the whole world will be able to 'see' what the planetary pair has simmering.

However, the only aspect to or from Jupiter and/or Neptune are sextiles of opportunity from transiting North Node of the Moon (thus, a trine to or from the South Node). A Jupiter-NN sextile (60 degrees) suggests good fortune with all expansive enterprises and promotional activities which require cooperation from the public (NN), plus, some form of conventional religious involvement may be offered. Meanwhile, a Neptune-NN sextile indicates an ability for harmonizing with and influencing social trends or customs, wth perhaps a bit of spiritualism (or spirituality) tossed in. A talent for subtle evasion helps some people circumvent such Neptunian influences if they so desire but naturally, nebulous Neptune can always bring a sense of confusion to any situation, even deceit, corruption, paranoia, fear, and fanaticism. And yet compassion and sympathy for the disadvantaged can seep into our hearts, even so, bringing charity along with them.

And yet until April 2022, we remain under the auspices of the last and current Jupiter-Neptune Conjunction which was actually a three-fer all through 2009 when US natal Moon in late Aquarius was directly touched by Jupiter-Neptune's mystical wand of dreams and visions. You'll remember that 2009 began the era of President Barack Obama with the uplifting vibes of his 'rock star' persona, as his persuasive motto, Yes We Can, was promoted across the land, and vibes of Jupiter-Neptune were imprinted forever upon his presidency. Of course, the Jupiter-Neptune pair often represent promotion with grand spirits and schemes that are always 'sure things' but which often contain an element of overpromising (perfect for Politics). And note that scandal, religiosity, and/or political conflict can come along in the wake of expansive Jupiter and watery, oceanic Neptune.

Yes, in April 2022, a new batch of 'lack of reality' and 'pretense' will continue to cast a glittering spell across the globe, timed by the next Jupiter-Neptune Conjunction - this one in shady, secretive, contagious, mystical Pisces (see the center of the chart for the Sabian Symbol for "24Pisces"). High seas, fish, and shipping or boating may be in the news to a surprising degree. And if I were you, I'd be on the look-out for visions (of 'UFOs'?), marvelous technical inventions and special effects, and of course, get-rich-quick schemes that can trip you up and drain your coffers if you don't watch out!

Because All That Glitters Cannot Possibly Be Gold

In closing, below is a previously published dual chart displaying both the 2009 and 2022 Jupiter-Neptune Conjunctions for easier comparison. Prominent as you see, is the 2022 Mars-Saturn near-conjunction in late Aquarius affecting the Great Conjunction of 2009 which suggests potentials for being let down by others (unreliability), faulty schemes of speculation, false hopes that don't work out, pessimism, loss, disappointment, and/or possibly illness for some. So while glitter is always seductive and more pleasant, keeping our grasp firmly upon reality will be necessary and most helpful in 2022 and beyond - if we can manage it. 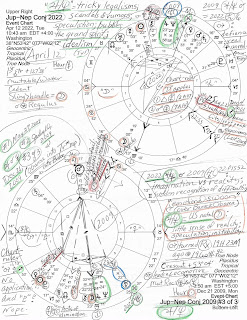 Be courteous -- No ads -- including for astrological, Tarot, or psychic readings and consultations. Otherwise, your on-topic comments are always welcomed in this Political Astrology arena, and are fully moderated when I have the time.

And please remember that your kind Shares and Likes are always much appreciated!

But here's a new notice: Abuse of courtesy has occurred. Therefore I will no longer publish comments from or by "Anonymous." No exceptions, no matter brilliant the insights therein. Either name yourself or keep your comments to yourself.