Mystic Rectangle and a Beatles concert 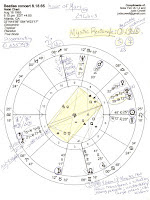 Here you see the chart for the August 18, 1965 Beatles concert I attended in Atlanta, GA. so many moons ago.

Just what is a Mystic Rectangle pattern? Is there a Magical Mystery Tour involved?

Chart details have been published at Jude's Threshold where I'm having difficulty with image optimizing programs (guess I haven't found the right one yet) so I'm linking to the chart here on SO'W.

With the current 40th anniversary of the release of the ground-breaking and mind-blowing Sgt. Pepper's Lonely Hearts Club Band, I decided to blurb about the night the Beatles and I were "together" at Fulton County Stadium...and you don't have to be a former 'Flower Child' to join in, y'know...All You Need Is Love!
Posted by Jude Cowell at 6:11 PM