Mystery Impact on Jupiter and The Great Stone Face

SOMETHING HAS JUST HIT JUPITER: Veteran amateur astronomers Anthony Wesley of Australia and Christopher Go of the Philippines have independently observed an impact event on Jupiter.

The strike occurred at 20:31 UT on June 3rd and produced a bright flash of light in the giant planet's cloud tops. Visit SpaceWeather.com for images and video. #

Well! Here's Jupiter in the news just as the jolly red giant approaches the Aries Point of Prominence, Fame, and Recognition for its rendezvous with quirky Uranus @ 00Ari18 (their Great Conjunction is on June 8 but they parallel one another for a few hours on June 19 which could be the more important date of the two.)

Now yesterday when the mysterious impact occurred (and don't forget Jupiter's other mystery, the recent disappearance of the planet's southern ring - not the first time the ring has 'disappeared' or become invisible from Earth) Jupiter's Tropical position in the zodiac was 29Pis41 so rounding up for its Sabian Symbol we have a very interesting word picture considering that massive Jupiter now emphasizes it:

positive expression: self-integrity in its irresistible impact on the course of events;

That's from Marc Edmund Jones' The Sabian Symbols in Astrology (my bold.) Dr. Jones goes on to explain the degree as 'a symbol of human responsibility as an immortality of the soul, and of a way of living which has become a continual manifestation of its ideal so a constant dramatization of its self-discovery to others as an encouragement to them in their own alignment to eternal reality.

Each individual selects the image within himself to which he would shape himself outwardly, and this he comes to resemble as in Nathaniel Hawthorne's tale. Destiny is character as it most persistently constitutes itself.'

Click and you'll notice the word 'titan' in Hawthorne's story as Jupiter's titanic size crowds the mind, plus 'impact' is mentioned in the degree's positive expression as Jupiter's 'integrity' is somewhat breached by an impact of some sort.

And now, a smidgen of Art, a drawing perpetrated a while back as an illustration for '30 Pisces', a very inspiring degree where my own goal oriented Sun/Mc midpoint hangs out! 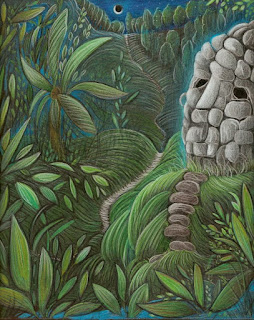 Temple of the Great Stone Face from Secret Moon Art, my Art-Astrology blog of images and Art Slideshows.
Posted by Jude Cowell at 7:42 AM