For your consideration here is a list of all Solar and Lunar Eclipses including their zodiacal degrees for the years 2015 through 2022: 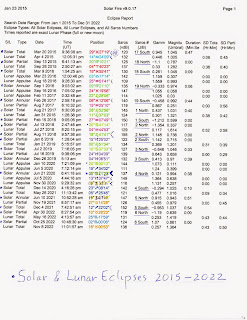 Note the degrees column is marked to the right to emphasize eclipses that link to America's natal planets (July 4, 1776) and on the left are dots indicating those falling upon critical degrees such as 20 Cancer. The Annular Solar Eclipse of June 21, 2020 @00Can21:23 in the 4 North Series stands out because it manifests at Summer Solstice as does the first Solar Eclipse of March 20, 2015 @29Pis27 for its nearness to the Aries Point (33' orb).

Both 00Ari00 and 00Can00 are, as you know, critical-degreed Cardinal Points of world events, fame, prominence, and recognition and when triggered, tend to stir things up on a worldwide scale. And of course, the 'wild cards' of the Universe, eclipses, give a chaotic Uranian flavor to conditions and events.

Naturally, some eclipses bring positive vibes into earthly conditions while others bring more negative events and reactions. Of course, a multitude of other cosmic factors play in to the 'As Above, So Below' picture as well yet eclipse themes provide background influences--the programs that 'run' silently or noisily beneath the desktop of civilization.