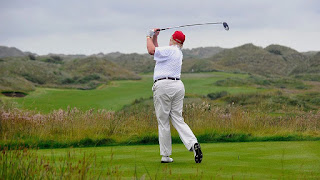 Update Jan 17, 2018: in spite of any glowing reports you've heard, it turns out that Mr. Trump is borderline obese and has a common form of heart disease according to Dr. Sanjay Gupta. For some of us, this is no surprise just from gazing upon His Heftiness.

It has been announced that on January 12 2018, Donald Trump is scheduled to undergo an official medical examination at the Walter Reed Military Hospital in Maryland as required for anyone who plays the role of US president.

Considering Mr. Trump's age and his widened girth, metabolic syndrome and the health conditions it threatens is a potential. However, whether an honest "read out" of the examining physician's assessment of Trump's health will be publicly forthcoming remains to be seen but the spread of his middle via fast food consumption is disturbingly on display for all the world to see especially when golfing. As you can tell in the photo (which may soon be deleted from this post), the infamous #TrumpRump cannot be hidden by baggy golf pants!

So on January 12, 2018, what's the cosmic weather forecast?, you may ask. The hour of his doctor appointment has not surfaced so I peeked at the planets of the day and found that the Moon enters Sagittarius at 2:04 am est and the Sun is, of course, in Saturn-ruled Capricorn. Chances are Trump's exam will not take place with the Moon is Scorpio (between midnight and 2:04 am) so let's consider a few details for the Sun Cap-Moon Sagittarius blend in effect on January 12, 2018. These energies tend toward verbosity, pomposity, exhibiting intellectual pretension when feeling insecure, and a fixation on narrow, rigid views that can become moralistic. (Sun Sign-Moon Sign, Charles and Suzi Harvey). Does this sound like anyone we know?

Plus, Sun Cap-Moon Sag is an Earth-Fire blend of strong, compelling energies. This is the 'bulldozer' combo that goes for the main chance, has enormous certitude about its beliefs, and has a deep need for power and the freedom to express it. Earth-Fire is the natal blend of mogul financier J.P. Morgan Sr who asserted that, "I don't want a lawyer to tell me what I cannot do; I hire him to tell me how to do what I want to do." This arrogant attitude also applies in the case of Mr. Trump, as you may agree. So if exam results are too revealing, will Trump attempt to override the examining physician's assessment?

But wait! Here's what may be an even more appropriate quote from a Sun Cap-Moon Sag native, journalist and critic Alexander Woolcott:

"All the things I like to do are either immoral, illegal, or fattening."

Well, considering the physical exam the girth-widened Mr. Trump has scheduled for January 12, 2018 (plus, his administration's ongoing scandals and legal troubles), how perfect a quote is that?

So perhaps we'll hear of the senior Mr. Trump's health condition by the eerie light of the January 31, 2018 Leo Lunar Eclipse, a second-in-the-month 'blue moon' at that, which perfects about 1.5 degrees from Donald Trump's natal Pluto (10Leo02)...because We The People have a right to know!