January 23, 2020: Tonight near the end of House manager Adam Schiff's argument, he spoke passionately including the idea that "Trump is dangerous" and that "right" has to matter. Below is a bi-wheel with Mr. Schiff's natal horoscope in center and tonight's transits for the time I heard him say these things (10:29 pm ET, give or take a minute). Messily marked upon the image are the planetary contacts that pop out most obviously: Uranus to natal Mars, Mars opposite natal Moon, Moon opposite natal Mercury, Saturn opposite natal Mercury. Eagle-eyed readers will find more contacts I'm quite certain and those who missed Schiff's speech may locate it on video, perhaps tomorrow which is the Democrats' last day to present their arguments: 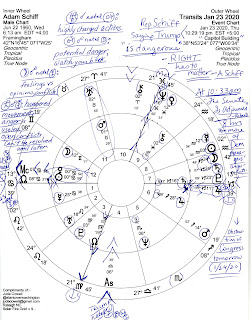 Adam Schiff shines brightly as he stands above the a sea of old entitled white males that lie, and cheat their way into power. Corruption, greed and cruelty is the American way. Its time to bring balance into our lives...America needs to elect women.

I like how you think linda c thomas! Jude

Adam Schiff is a brilliant spokesman for the better angels of our country. I love your quick response to his brilliant closing of the day in real time. Thank you. I keep hoping the Uranian "break open, break through as well as break apart" adage helps power his words into the hearts and minds of all Americans. Thanks Jude.

I totally agree with your "break open, break through" I want Americans everywhere to begin screaming "Enough".

Thanks Jude for creating a place where I feel heard.

Linda you're welcome, I appreciate your thoughtful comments, Jude