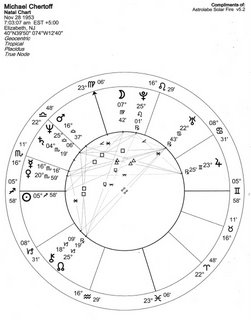 Here's the sunrise chart (birth time unknown) for Mr Chertoff, who may soon be saying buh-bye to his czarship of Homeland Security.

Here are Chertoff's Sun/Moon personality blend and his natal midpoint pictures for your consideration...

Sun Sag/Moon Virgo: an athlete gives a fund-raising performance for charity...a philosopher presents a perfect mathematical vision of the nature and meaning of the universe...The Ten Commandments.

This combo describes a practical idealist who is prone to mental obsessions and has a tendency to moralize. His desire for certitudes can cause narrow-mindedness, yet, positively, there is an ability to persuade others with clear arguments and a calm integrity. This is the combo of an educator, and is shared natally with Thomas Carlyle, who said, "Nothing is more terrible than activity without insight."

Mars/NN = Sun: the will to unite with others; cooperative teamwork.

(Progressing the sunrise chart to March 6, 2006, secondary Moon at 7Leo03 is conjunct Bush's natal Ascendant, the "Bolshevik propagandist" degree. Chertoff's sec Moon = sec Uranus/Pluto: daring and audaciousness; bringing about changes by force. As you know, the combo of Uranus + Pluto = the collapse of the old order of things, the construction of the new; revolution; transformation.) And it would be great if he used this energy to rebuild New Orleans, rather than the US government, wouldn't it?

So will Chertoff be tasked with falling upon this sword?

I'd be quicker to hazard a guess if I had his correct birth time, but one thing I do know:

Transiting midpoint of Saturn/Pluto has been hanging about Chertoff's natal Mars (energy, action, initiative) 2005-06, and so we see:

And natally at *16Lib+ he has two asteroids, Toro = capacity to use and control power; strong will; the power of boundless strength...and Atlantis =
sense of doom; use/abuse of power; ethics.

Seems Mr Chertoff's use and abuse of power has been in process of being tested and put on the line. And if you asked Katrina's victims, I doubt they'd say he's passed the test.

And since I agree with them, let me help you hoist that sword, Mr Chertoff. George Bush ain't worth it, but you knew the deal when you signed on, I'm figuring.

Cash in your chips while ye may.


(*16Libra+ is also the natal position of Bush's Moon, so he's been on the oppressed and depressed side...well-deserved, most would agree.)