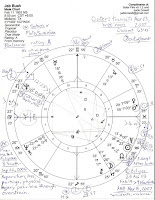 By now you've heard Jeb Bush was dissed by the University of Florida's Faculty Senate vote nixing an honorary degree for him. The 38-28 vote could not have gone down well with the Bush dynasty spawn but never fret because the Alumni Association has come through to save his tender feelings by passing a resolution today making him an honory alumni.

Who knew you could be an alumni without accomplishing the goal of attaining a degree even an honorary one?

Here you see Bush's natal chart with transits for 3.23.07 scribbled around the outside although I just realized the diss-vote was taken on Thursday, 3/22...but the main difference is the Moon in Taurus on Thursday--entering Bush's natal 9th house of Higher Education...appropriate, I'm sure you'll agree.

Natally, Jeb Bush was born into the Balsamic phase of the Moon--in its highest manifestation this makes him a prophet turned completely toward the future. He probably feels himself possessed by a social 'destiny' or that he's led by a superior power (Poppy?)

Bush may sense a character of finality in all his important relationships and sees them as ends of a process and as the means to help him reach his goals.

Balsamic types often take over projects when others cannot carry on--or when they arrive on the scene, someone is always leaving in some way.

This feeling of having a transcendent goal may lead to fanaticism and is shared natally by Robespierre, President Wm McKinley, and Thomas Paine (The Lunation Cycle, Dane Rudhyar.)

Recently tr Saturn has been messing with Bush's n Pluto which signifies a time of power/control issues where one may not get to be the one in charge.

Obviously this relates to the end of his tenure as FL governor esp since tr Saturn had been conjunct n South Node, a point of separation. And with his South Node (SN) in 11th house of Groups/Associations/Friends/Hopes-Wishes, there were endings of group associations as well, and possibly separations from friends.

The dissing of his educational record by the Faculty Senate vote is timely since he's just had a Mercury (thought processes; communications) Return and Mercury is weak in Pisces, sign of confusion, illusion and such. Very creative though, and his Sun trine Neptune--the closest applying aspect to n Sun and thus an integral part of his personality--indicates much creativity.

But the individual path of self-expression should be followed. However, this is all but impossible with n Sun opposite Pluto (power; manipulation) because:

Jeb was born into a family with a highly manipulative atmosphere at a time when his father was into 'Plutonic games' (I think he still is.) As an adult, Bush may insist on controlling everyone in his environment--and he learned this behaviour at Poppy's knee.

When such a child's Sun is in Fire or Air (Aquarius), he is overwhelmed by his father's influence for his mind becomes submerged in his father's "power trip." He may have no idea how to break free.

And Jeb's natal Ascendant has the Neptune/Pluto midpoint upon it--rising--indicating someone who is into the occult and/or mysticism--which is supported by the above-mentioned Sun/Neptune trine. A study of Astrology may have aided him in breaking free of his father's control--to the extent he may have wanted this.

Nep/Plu = ASC: surrounding oneself with a mytical air; being placed in a peculiar environment.

The Nep/Pluto pair are personalized in his natal chart due to their connection to n Sun (although the Pluto opposition is separating so it may operate more often on an unconscious level...added to Pluto's connection with theUnconscious/depth psychology.)

Is Jeb an 'unconscious' despot? His wife and children must know the answer to that one!

Yet unlike most politicians, he has no 12th house planets natally so his Sun-Pluto opposition will have to do for his political aspirations and tendencies...and Pluto is near the 12th cusp in the Placidus House System used here (and may be in 12th house in other systems.)


If you enlarge the chart you'll see the particulars of Bush's Pre-Natal Eclipse Series (8 South) which manifested once again Sep 22, 2006.

This is the "separations; loss; partings; physical injury due to overstrain" Series we've been under--until the Mar 19/20 Eclipse on Monday which also occurred 3 days after Jeb Bush's birth. This 9 New North Series (28Pis07) is a "violence; accidents" Series.

(Looking back at 1953, that was the year the CIA installed the tyrant, the Shah, in Iran...and our chickenhawk neocons are now wishing they could perform a similar feat there again, aren't they?)

But back to the Jeb:

You see that tr Pluto, master of transformation, has recently crossed into his n 4th house, the Foundation of the chart. This indicates that it's time for Bush to cope with negative conditioning from childhood that my be affecting him adversely now...not easy when you have Sun opposite Pluto, but perhaps he's happy as a clam with the family crime syndicate he was born into...but be that as it may...

family ties may be broken or become more more close and powerful under this transit and his status within the family will be a focus of attention (for a 2008 prez bid?)

An older family member or two will pass away with tr Pluto in 4th house which is a Duh considering his parents' ages.

Home renovations and plumbing repairs are common under Pluto's visit to 4th house of Domestic Scene...plus, he may discover a family secret that will transform his life (hope he keeps it to himself--his family dynasty is scary enough already.)

Well, that's a small sashay down Jeb Bush Lane. Now here's a question for you:

When is a university alumni not an alumni? When you're part of the well-connected Bush dynasty, of course. You may take your seat at the head of the class!


note: most of the Sun-Pluto/Sun-Neptune info from Betty Lundsted's excellent book, Astrological Insights into Personality...I highly recommend this book.
Posted by Jude Cowell at 6:55 PM