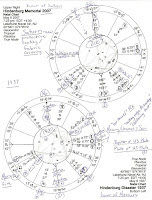 This evening the Navy Lakehurst Historical Society is holding a private memorial service in honor of the 70th anniversary of the Hidenburg Disaster.

The luxuriously appointed Hindenburg erupted in flames on May 6, 1937, 7:25 pm edt, as it landed at the Lakehurst Naval Air Field with 1000+ passengers onboard. Having made several trips in 1936, this was its first voyage of 1937.

The swastika-emblazoned zeppelin was the pride of the Third Reich and had been named for Paul von Hidenburg (1847-1934), who was president of Germany from 1925-1943. The German government purchased the ship as the Zeppelin Company struggled during the Depression, so the tale goes.

Due to a US embargo on helium, the Hidenburg was filled with bags of flammable hydrogen and through the years its demise has been primarily thought to have been static electricity from earlier storms in the day igniting leaking gas...if not sabotage, Pluto's domain. (1937 Pluto was opposite US n Pluto, and tr Jupiter was conj US n Pluto...not enough to go on without further investigation.)

Asteroid, Midas, was conj the Sun in greedy, sometimes intolerant Taurus...possibly related to the US embargo mentioned above.

But the garlic which had been added to aid with odor detection in case of a leak, did not indicate such a leak according to the ship's captain.

The Concorde of its day, the Hidenburg has been called the "Titanic of the Sky" and was thought (in similar fashion to the doomed ocean liner) to have been "infallible."

The most prominent theory for the fire which I can feret out is from a NASA scientists' research indicating that static electricity (Uranus) had ignited (Mars, in 1st house and Rx) the fabric covering (Saturn) which had a new (Uranus) protective coating (Saturn.)

You see Mercury (air travel; communications) is Rx also. The ship had been used to deliver Third Reich propaganda and was filled with mail from various countries to be delivered inside the U.S.

Here you see the charts for the disaster--which took appr 34 seconds to engulf the ship and crash it in flames--plus, the chart for this evening's service.

In 1937, there were asteroids of note: determined Sisyphus at MC opposite Arachne (webs, membranes, networks) and wax-wing-melted Icarus, an asteroid often active in air disasters.

The fabric covering was fitted over a metal frame, and the most recent research seems to show the possibility that German scientists' methods and design were at fault, infallible as they preferred to be considered. Some of the fabric remains and has aided in the protective coating part of the theory's research.

It is my estimation that tonight's chart with Saturn at MC--describes the scientists of 1937's determination (Sisyphus) for authority (Saturn) and was at least in part the WHY (MC) of the disaster, couple with Arachne's and Icarus' influences at the Foundation Point--the IC (endings; the drain; the HOW Point.)

There's a site with slideshow and video of the disaster at vidicom-tv.com which includes footage filmed onboard--the film survived inside the camera but its owner did not.

My heart goes out this evening to the survivors and descendants of this horrible air disaster (as are we all in the larger sense) while also remembering that arrogant infallibility gets mankind in a heap of trouble for pride comes before a fall.

Tiresome platitude? Perhaps, but we hear it so often for one good reason: because it's so very true.
Posted by Jude Cowell at 2:36 PM