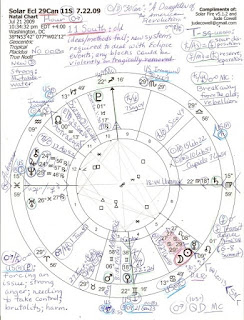 Update/Correction: above chart and post titles both show "July 22, 2009" but as you plainly see from the chart's date, the Eclipse occurs in the Eastern time zone on the evening of July 21...yet if I change the post's title it will confuse crawlers and spiders everywhere, so I stand self-corrected and hope you can forgive me a crazy typo!

Eclipse occurs in 5th house of Creativity, Risk-Taking and Gambling, Romance, and Progeny; Mars Hour, no out-of-bounds planets so all are on the Earthly plane and participating within the group; Mutable-Water strong.

Venus is just beyond her 'Venus Transit' degree of June, 2004, the day of the G-8 Summit on Sea Island, GA. Venus Transits indicate a time when unsuspected associations are formed with unusual partners.

Sun-Moon applying (1A50) to inconjunct with Pluto 1Cap17 Rx in 10th house of Public Status. Morya and Pluto are still traveling together.

Sun inconj Pluto: taking on more responsibilities; need is to dispense with non-essentials and focus energies on specific goals; the less conflict created when dealing with others the better.

Moon inconj Pluto: objectivity needed; over-reaction to other people's demands and needs yet submission brings contempt; need to unlearn old habit systems to avoid being taken advantage of; good for working behind the scenes but with a tendency to be a patsy for other people's incompetence.

As you see, the Eclipse is at a critical or crisis 29th degree, but I'm using the rounding-up method: '30Can' has this Sabian Symbol: "A Daughter of the American Revolution"...INHERITANCE (MEJ.)

pos: an infectious pride in leadership through which a group is able to act as a unit;

neg/unconscious/shadow side: the ultimate betrayal of self hood by a false assumption of superiority.

There is more to say about this rather difficult Solar Eclipse but it will have to wait until I have more time...for now, click chart to enlarge for a few of my private notes including some of America's natal placements highlighted in blue.

In pink is notated Bernadette Brady's description of the 11 South Series of Solar Eclipses which last manifested on July 11, 1991, 18Can59.

Hi Donna, look for the house polarity even if the Ecl degree makes no aspects to your planets or points.

If there are none, then house polarity is most important for you - but remembering that you may not respond to the Ecl at all what with Eclipses being 'wild cards'!

They may also activate earlier than their date (usually by about 2 weeks) or later (almost a Uranian quality since Uranus can act erratically/early or late, too.)