Rand Paul refuses to Meet The Press after all

After agreeing to be interviewed on the May 23, 2010 broadcast of Meet the Press, a rather coy Rand Paul has cancelled his appearance because the 'splainin' he had to do about his awkwardly expressed views on the Civil Rights Act has already been 'splained.

Quelle disappointment! My Sunday morning political show viewing won't be the same without Rand Paul running full throttle into the Verbal Tarpits of Politics, with only himself to blame for the blowback, and even David Gregory asking the uncomfortable questions.

Well, if 'open mouth insert foot' is young Dr. Paul's way of committing Politics, then I say let's have more trainwrecks of politically incorrect utterances from him. They're entertaining if wince-worthy.

Yet who knows where such brou-ha-has may ultimately lead?

They could even lead to a bumper sticker! And I can see it now stuck strategically on your Volt's rear window, taunting the neighborhood during your every errand:

'Sarah Palin For President 2012' with Rand Paul playing her VP sidekick...they lead that straight-talkin' gang of varmints who misspeak at every turn, but By Gum, they mean well.

And they 'know what's wrong with America'.

So now, just because I can (and because you've sort of earned it if you've managed to read thus far), here's a politically inspired image republished just for you... 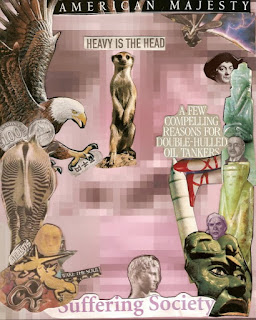