Known since 1960 for its casting of votes between midnight and 12:01 am, the township of Dixville Notch, New Hampshire deserves its voting horoscope for November 6, 2012 to be published, don't you think? Especially since Election 2012 is deemed by the media to be such a "close race" and all: 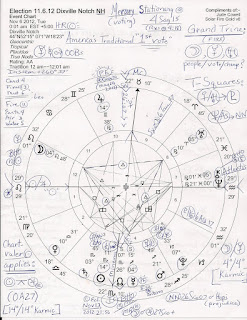 First off, the planet of votes, Mercury, is stationary at its Rx degree! As Mercury seems to move backward (Rx) and won't move beyond its shadow degree until December, another contested presidential election may be upon us, or, if White House results are clear the evening of November 6th (improbable!), then congressional elections are sure to be all a-tangle--perhaps both will be affected (my best guess) by re-counts, machine breakdowns or unavailabilities, shady voter-roll purges, robo-calls of duplicity--well, we already know an election train wreck may be coming, right?

Then there's chart-ruler Sun 14Sco11 in 3rd house making only one applying aspect, an inconjunct to Jupiter! This aspect denotes adjustments needed in finances--low funds for the Obama campaign?--but also feelings of discontent with someone. Now Romney's chart has the most Scorpio planets yet Mr. Obama's natal Neptune, planet of discontent and disappointment, is in Scorpio; Jupiter's sign shows relating style and here, Gemini is feeling underappreciated--it's difficult to relate, in fact (like out-of-touch Romney) to Corporate Scorpio and it's hard to diagnose what's needed for improvement (Jupiter.)

Now wouldn't it be simpler if we could say that Jupiter 14Gem38 Rx in 10th house, being nearer Midheaven (The Goal) than Saturn 3Sco45 (3rd H) denotes a Republican victory in the nation's First Vote of Presidential Election 2012? It's quite a common method in Mundane Astrology yet our two parties do like to trade off roles as they're doing now: the GOP (Jupiter = grand!) behaving like Saturnian spartans glorifying austerity (after 'spending like drunken sailors'--remember that description of the GOP during Bush-Cheney's terms? Then the Big Heist was perpetrated at the end in 2008 and America was declared "bankrupt!" and in dire need of cutting 'entitlement' programs, the social safety net that helps support our less affluent citizens with meager cushions to fall back on in times of need.)

The Democratic Party--the older of the two parties and often said to be signified by Saturn--now seems to be for investment (Jupiter) in America, a course that President Obama says he believes in, as he believes in America. If this is so, then I must hereby call the Dixville Notch vote for Mr. Obama whose natal horoscope is more positively affected by the November 6th planets you see here, plus, Jupiter (investment) is near MC in the 10th house of Public Standing. Its Rx condition shows political and ideological pushback on making such investments (which might make President Obama 'look good' to voters.)

Now as you know, Gemini is not the strongest sign for Jupiter to be in since it is opposite Sagittarius, ruled by Jupiter. However, Mercurial realms such as transport, travel, trade, commerce, and science should benefit in particular with innovative ideas all around--we'll see its full potentials after Jupiter's rather long retrograde period ends on January 30, 2013 @6Gem19, with the Great Benefic reaching his shadow degree 16:22 and really moving forward on or about April 15, 2013.

And of course, US natal Uranus 8Gem55 is being conjoined off and on during the same period by jolly Jupiter, an indicator of independent thought, inspiration, and joining group causes such as those of a political or scientific nature.

First of all, Fire GTs must express vitally and spontaneously in exciting ventures and its tendency toward a heightened self-pride is perfect for a First Vote tradition. The Moon in Leo is warm and generous so will the proposed austerity of the Romney-endorsed Ryan budget plan satisfy the voters? Thomas Jefferson was born with a Fire Grand Trine and I can't imagine the GOP's current 'pursuit of austerity' would suit his idea of America, can you? If you're pursuing it, there's not much happiness to be found in The Plan unless you're a member of the ruling elite or a poo-bah of the banking class. Of course, everyone knows the GOP austerity mantra is really about rolling back FDR's New Deal programs along with the progressive social improvements of the early 1900s...another reason that Saturn signifies the GOP whose heyday was the 1890s of the Robber Barons (Neptune conjunct Pluto.)

Even so, at the mercy of Dixville Notch voters, Mr. Romney (a Jupiterian on a personal level) is not wholly without potential on November 6th. That's his somewhat charming Moon-Jupiter conjunction placed paradoxically in intense Scorpio notated at the bottom of the chart (near IC, the Foundation of the Matter) with the Jupiterian North Node (NN) of the Moon (the public) still within orb of conjoining his Moon-Jupiter pair, a conjunction which may often indicate natally an indulgent mother (of course you'll be president when you grow up, Mittsy!)

Yet a fly in Romney's victory ointment may be the voting Moon 4Leo48 in 12th H of Politics which nestles amongst Pres. Obama's natal (intellectual) Mercury and Sun giving us a midpoint picture to consider with The Voters as focus...Sun-Mercury = Moon: effective communications to the masses; emotional thoughts.

Simultaneously, the 12th H voting Moon nestles between a pair of Mr. Romney's natal planets: Saturn 2Leo23 Rx and Pluto 11Leo21 Rx, at the IC of his natal chart, and what I've described in a previous post as a 'vulture capitalist' signature hidden at the base (IC) of his psyche (natal chart)...

Inconsistent, flip-floppy, a spotty and veiled record, plus hidden tax returns--yep, that's Mittens the secretive Mormon who seldom met a job he couldn't outsource or an Olympics he couldn't 'save' with taxpayer millions. Plus, I think that tucked away as it may be, many people intuit his harsh, bullying, cold Saturn-Pluto conjunction, don't you? Is that mild demeanor the disguise of a fish? Romney's natal Mars, Mercury, and Sun are in fishy Pisces--you decide if he's for real or not!)

Well, the midpoints formed by the Grand Trine may be of interest so let's take a peek with Moon = the voters, Mercury = the vote and thinking processes, and Uranus = change, progress, and/or the future:

(The above midpoint potentials are from Solar Arcs by Noel Tyl.)

Also, as you see, the happy, successful Sun-Jupiter midpoint is rising in Dixville Notch so we have Sun-Jupiter = ASC: successful teamwork; great enthusiam; infectious happiness.

For these, and several other astrological reasons, I shall call Dixville Notch's First Vote for President Barack Obama--unless the good people of Dixville are up for a presidential change bwo Moon-Mercury-Uranus--even if change brings a circling of vultures even more ravenous than the ones we have circling already...

Oh wait! One more thing: given how a higher agenda to rule the world grinds along no matter who 'wins' the US presidency or which political party is in control, I find in my heart of hearts that I must agree with Emma Goldman...

"If voting changed anything, they'd make it illegal."