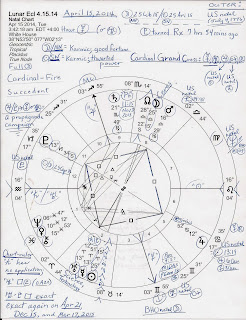 Here is the horoscope of the April 15, 2014 Lunar Eclipse @25Lib15, in 8th house when the chart is set for the White House. As you see, the Uranus-Pluto square again participates in a Cardinal Grand Cross which also involves Jupiter (conjunct US natal Sun, the president) in 5th house of Gambling and Risk-Taking, activist Mars @16Lib29 Rx (in process of aggravating US natal Saturn @14Lib48), and a conjunction of Mercury and Uranus, both at 13+ Aries and indicating Science, Technology, communication, and innovation.

In fact, the Mercury-Uranus combination denotes a 'propaganda campaign'--Ebertin.

The Jupiter-Pluto opposition across the Can-Cap axis of Security and Authority continues to bedevil America's natal Sun (13Can19) via a titanic power struggle and many challenges in financial, social, political, environmental, and military realms. Even religious and philosophical beliefs are embroiled in the plutonian melee ongoing as systems and structures break down and are purposefully broken down by hidden forces. See The Changing Face of Christian Politics. Here, Pluto is especially strong because the 'god of Hades' is stationary, having turned Rx 7 hours 54 minutes prior to this eclipse.

Lunar Eclipse @25Lib15 April 15, 2014 at 3:42:18 am EDT,Hour of Mercury, this Lunar Eclipse falls upon the karmic Nodal axis with Moon-NN conjoined (good fortune in 8th house matters such as Corporatism, Big Business, Shared Resources, Insurance, Debt, Credit, Legacies, the Occult, Transformation, Death) and Sun-SN, a sign of limiting conditions in the power and leadership arena. The karmic part comes in from reaping what was sown in the past--abuse or misuse of power, etc. It is this dissenting American's opinion that our nation has much to answer for due to its dealings with others.

With my blogging time brief today, you may hopefully be able to read my chicken-scratch notes on the chart if you enlarge the image, and I shall simply add the applying aspects of the chart-ruler (Saturn with 16AQ04 rising) and sub-ruler (Uranus) to see how the proceedings may go.

However, austere Saturn makes no major applying aspects to another planet (actor) in the chart, and the Uranus-Pluto square is the only applying aspect made by tech-savvy Uranus in the 2nd house of the National Treasury. Speedy Mercury as what I call our 'tofu planet' (because it soaks up whatever flavors from a planet it touches) denotes a scientific flair to the Lunar Eclipse which may perhaps relate to the current issue of Comcast and Time-Warner merging into a communications leviathan.

Uranus is squared by Mars and Jupiter (in the Grand Cross pattern). The Mars-Uranus square brings in an unfortunate amount of danger, foolhardiness, recklessness, and quarrels into April's lunar picture and since all eclipses act as 'wildcards of the Universe', we never know what secrets may be revealed. Having the Pisces trio rising in 1st house (Neptune, Venus, and Chiron) can actually spotlight the Vatican or the Vatican Bank which is known to have laundered money, among other anti-social activities. I mention the Vatican because of its veneration of Mary as a goddess (Venus-Neptune) and Chiron's role as The Priest. (Plus, POTUS travels to Rome to kiss the Pope's golden ring in March; Queen Elizabeth to do the same in early April. Pluto may also represent the Pope.)

With Neptune rising, we may meet with conditions that are out of anyone's control and which cause tears to flow. Neptune oversees water, oceans, rivers, wells, and catastrophes such as the disasters the world is already experiencing in West Virginia and elsewhere. See Water in America: Is It Safe to Drink?. Yes, April 2014 is a good time to question water safety issues and to find inspired solutions--and I freely admit to being one of those who see the Keystone XL Pipeline as a major threat to water tables within its leaking grasp, not to mention earthquakes and water contamination caused by fracking. And of course, Neptune rules oil and gas, too!

As for the Jupiter-Uranus square we may expect much impracticality, idealism, and misguided speculations that lead to loss. Unforeseen events and a lack of reliability may also be noticed so avoid grandiose schemes that are promoted to you as 'sure things' while this influence lasts--including schemes that are presented with religious overtones for this square tends to boost the activities of gurus, charlatans, and so-called mystics and mediums.

Up next is the 16 South Solar Eclipse of April 29, 2014 @9Taurus in the 3rd house of this Lunar Eclipse chart. 16S denotes issues of wasted energy especially when dealing with groups, misguided motivations, and sudden inspiration that is potentially unfulfilling. 16S last occurred in 1996 @28Aries, conjunct the South Node of this chart--perhaps the GOP's insistence on airing the dirty laundry of the Clintons from the 1990s is on tap as shown by the SN's karmic 'dependence on past behavior' habit. How tiresome. Let it go. (Brady's 'Predictive Astrology'.)