It's official: the 2014 Charlemagne Prize goes to EU President Herman Van Rompuy so we can all stop sitting by the phone for the news of our victory.

And since members of the power elite drag this bloodline emperor's name up every year from the Collective Unconscious to remind us of such fabled empire builders as he--the "King of the Franks", Charles I--here are Charlemagne's natal specs and you're welcome to them:

You'll find profile info such as there is and his natal chart here. (Marc Penfield speculated a birth time of 12:30 pm LMT (OS).)

742 was many moons ago, 'tis true but if you happen to know where the planets are at the moment you read the above list of Charlemagne's natal planets, you can see a few catalysts at work. If you don't know current planetary positions, perhaps you might scroll down the sidebar of this blog to the widget which shows their current positions!As far as Charlemagne Prize 2014, it seems that electric Uranus, a catalyzing genius of newness and of new order vs old order, hitting Charlemagne's natal Sun and Venus is the most tellingly of transits, or at lease the most obvious. Slow-moving Pluto has crossed natal Moon (publicity) recently or will soon and a Chiron Return (28Pis20) denotes an active Collective Unconscious involving something mystical that relates to The Quest. Grail or not, take that as you will if you're interested in such hidden matters.

Below is what seems to me to be the more revealing of the two 'Images for Integration' for his natal Sun Ari-Moon Cap personality blend and may refer to another of Charlemagne's kin--for they are both major cogs in the wheel of 'the great plan' that still bedevils mankind today:

For Legends in Their Own Minds, Ridicule the Best Antidote!

Yeah. Entities are hard at work implementing that 'new order' now and have been for a long time. You noticed, yes? The faces of the actors change but the plan remains intact though possibly perverted from the original, here and there. But let's not feed the jackals power by protesting their draconian policies as if they're real and deserve to believed--as if public officials and 'leaders' have control of us when in reality they're in breach of the public trust and needn't be taken seriously!

Here you see one of our cats, Roxie, not taking worldly prizes seriously in the least! 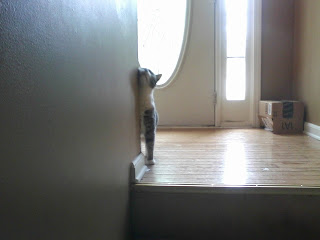