The following information is a blend of three SO'W articles concerning upcoming Solar Eclipses and The Great American Eclipse of 2017 in particular:

Perhaps the best website for information on the Solar Eclipse of August 21, 2017 is Eclipse2017.org so scurry there if you haven't as of yet, or bookmark the site for future reference. You'll find maps of Totality including Towns, Cities, and States, plus viewing details, eclipse safety glasses for ordering, and more information available on the site concerning this America-splitting cosmic event.

From the website linked above, here is a list of the states experiencing Totality and naturally, viewing will most spectacular in certain towns and cities situated in these states:

and South Carolina. Please check the website for specific cities--some are directly in the Path of Totality, some are on the edge of it.

From Oregon to South Carolina: Astrology of the August 21, 2017 Solar Eclipse

This will be the first Total Solar Eclipse to fall across the United States in 99 years and will occur @28Leo52 which opposes US natal Moon in our 1776 natal horoscopes set for around 5:00 pm LMT. Is this significant? Possibly so since the eclipse lands on the doorstep of the American people. And additiional consideration is a 29th degree is considered a critical degree condition for a planet straining in some way and may relate to the potential for natural disasters and/or disruption of energy (ex: power grid.) Plus, 29 Leo is near royal star Regulus (00Vir) with its caution: success if revenge is avoided.

In the symbolic Astrology used on this site, the first thing to know is that this eclipse falls in the 1 North Saros Series, the same Series as the August 11, 1999 'Nostradamus' or 'King of Terror' Solar Eclipse. Because of this, I close this post with the horoscope of 1 North's Initial Solar Eclipse which manifested on January 4, 1639 @13Cap48, a degree you recognize as transiting Pluto's recent playground. This adds to the transformative picture of the eclipse which has the usual Uranian 'wild card of the Universe' vibe that all eclipses carry. So when we think '1 North' we think The Mother of All Eclipses so naturally the sign of the initial eclipse of the Series is the filter through which we view subsequent 1N eclipses--now it's Leo (Sun) seen through a Saturnian Capricorn lens. Note that America's natal horoscope (July 4, 1776) contains a Sun-Saturn square.

The first landfall location is the Oregon Coast and the last place of Totality is in South Carolina before the eclipse shadow sweeps across the Atlantic Ocean after beginning in the Pacific Ocean. Below is the horoscope set for South Carolina which is quite near the degrees of one set for Washington DC so I'll not display a chart for our nation's capital since DC does not lie in the Path of Totality but some of the placements will be mentioned.

Also from the site linked above, here's a map of the Oregon Coast showing the Path of Totality where the 2017 Solar Eclipse first hits land. For the landfall horoscope I am using Lincoln Beach because of its proximity though smaller beaches are useful locations, too, as well as Newport, Oregon if you're so inclined to set up a chart or two.

For the last place of Totality of the August 2017 Solar Eclipse, the fishing village of McClellanville, South Carolina in Charleston County is the spot I'm using to set up the horoscope you see below. Please enlarge the image to read some basic chart details penned upon the image in my usual messy style: 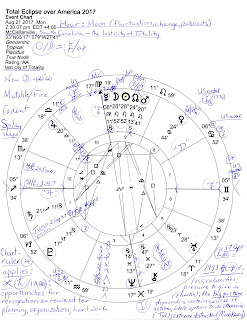 Now for a bit of context, here is a link to a recent post in which I list the August 2017 eclipse with details and the Solar Eclipses that lead up to it:

And here is a republish of a previous post concerning the Great American Eclipse of 2017:

August 21, 2017's 1N Solar Eclipse @29Leo is being called The Great American Eclipse and is highlighted (#6) because it is the first Total Solar Eclipse that will be visible in all the 48 states with a Path of Totality from Oregon to South Carolina. It is also significant because it manifests on a critical-crisis 29th degree and is near a Royal Star of Persia, Regulus, now precessed into very early Virgo with the keywords, 'success if revenge is avoided'.

A Solar Eclipse in proud Leo, ruled by the Sun (ego, hero's journey, natural leadership, royalty, creativity, vitality) denotes that karmic progress depends upon use of the positive Leonine qualities rather than pride, arrogance, egocentricity, vanity, pomposity, and other negative traits of Leo which retard or block karmic progress.

In 2017, the manifestation of 1N is the first time the 'Nostradamus' 'King of Terror' (or, 'Alarm')--the 'Mother of All Eclipses'--has repeated since its much-touted manifestation @18Leo on August 11, 1999. The Fixed Grand Cross of that eclipse is notable for its appearance in the Book of Revelation of the Oxen Point, the Lion Point, the Eagle Point, and the Angel Point of the mid-degrees of the Fixed signs (Taurus, Leo, Scorpio, and Aquarius.)

Perhaps you prefer to think this link by eclipse between 1999 and 2017 is of no matter. Well, as always, dear reader, that is up to you. Yet the Fixed Cross degrees and the degree and sign of the 1999 eclipse are sensitized and I expect some repetition of such themes. And yes, I do believe it is late days in earthly history--though not the latest.

The initial eclipse in the 1N Series occurred @13Cap48 (opposite US natal Sun = leadership) on January 4, 1639 OS with a money/power-related Jupiter-Pluto opposition across the Taurus-Scorpio axis. The Jupiter-Pluto pair denotes bankers, politicians, power brokers, and big wheeler-dealers who mount large projects (ed: like global government.)