On December 25, 2015 a Full Moon perfects at 6:11:27 am EST @3Can19 conjunct US natal Venus. As US History and the Cosmos would have it, this lunar position is the Syzygy Moon degree (last lunation prior to birth) of an ancestor of mine--a "double" ancestor thanks to his having two wives each with offspring who descend to my paternal and maternal side--because he was born Christmas Day 1776. Here's a noon chart for my "double" 4th-great-grandfather David Barnett (birth hour unknown) who was born in Christiansburg, Virginia and this "double" circumstance, I suppose, makes me my own cousin: 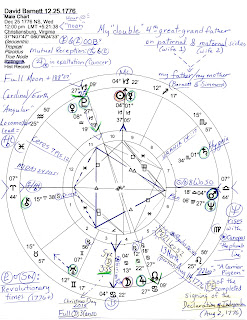 The KITE I'm not actually counting since his birth time is set specualtively for 'noon' but there is an Air Grand Trine pattern between Uranus, Mars, and Venus which denotes one who prefers a mental ivory tower, may have been somewhat detached or aloof, was charismatic, popular, idealistic, attracted friends and cooperation, and was a talented communicator (Tierney.) Of course, the protective nature of a Grand Trine was present. Success is indicated by a Locomotive shape with revolutionary Uranus as lead engine (and this is, of course, near America's natal Uranus degree.) Highlighted in yellow is David's Pre-Natal Eclipse Series, the 13 North which manifested on August 14, 1776 with the completed signing of the Declaration of Independence occurring on August 2--within two weeks of the eclipse ('breaking of an existing bond which leads to joint achievement'--paraphrasing B. Brady.)

Another curiosity of the 1776 and 2015 charts is that the December 25, 2015 Full Moon horoscope shows Jupiter and North Node near one another in transit (22Vir56 and 25Vir35--in 9th house in the Washington DC chart) and on David Barnett's day of birth Jupiter was exalted in Cancer (22:12 Rx) with North Node (NN) @27Can15 nearby--obviously Jupiter an dPluto were inprocess of opposing one another, a time of contest of wills and dealing with issues of power, control, and money. We already discussed the three times that Jupiter and North Node conjoin in 2016 and the possibilities. Additionally, Mercury in Capricorn and Mars in Libra are square one another in both charts (1776 vs 2015) though at different degrees; this square denotes creativity but also judgmentalism.

Now if you enlarge the chart you'll see David's Pluto-South-Node conjunction which I've marked as "Revolutionary times" for the pair denote war, violence, and massive disruptions in society. This is America's natal Pluto position, of course, but the SN is closer to Pluto here than in our natal chart with SN in Aquarius (July 1776.)

And in spite of all the current 'wars and rumors of war' going on and threatening to ramp up into global revolution, we must look to Spring 2019 to find another transiting Pluto-SN conjunction of the power planet of sabotage, spies, and death and the South Node of the Moon, aka, the tail of the dragon.