February 2016 seems an appropriate time for a re-post of the amazing interlaced triple-YOD horoscope of the Arab Oil Embargo of October 17, 1973 set for Washington DC; as you see, one of the YOD configurations is made up of vague Neptune (planet of oil and Islam) and deep mining, manipulative, obsessive Pluto in sextile as the base of one YOD (crisis; crossroad) and pointing toward contentious Mars: 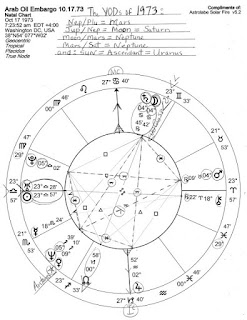 Please enlarge the image to read a few notes; 1973 planets subject to transits, progressions, and returns.

Related horoscope: OPEC (Organization of Petroleum Exporting Countries) September 14, 1960 9:00 +0:00 Baghdad, Iraq; OPEC's stated goal: to regulate the supply of the world's oil. Formed via conference which began at 11:00 am, a speech was delivered, and a resolution signed; hour approximate. Source: The Book of World Horoscopes, Nicholas Campion, chart #422.