Image: Dual Horoscopes of the Full and New Moons of March 2017; charts set for Washington DC:

The March 12th Full Moon is prominent as the 'bookend' of the February 26th Solar Eclipse in the 19 South Saros Series, the Pre-Natal Eclipse series of the White House and of the Democratic Party (February 17, 1801 1:00 pm DC; please note that alternate founding data exists).

Lower left March 27, 2017 New Moon @7Ari37 also in the 5th house (in DC) and times a new cycle of activity beginning in bold Aries, sign of the pioneer, adventurer, quarreler, and those with a lust for power. Hastiness and ruthlessness are the cautions.

Please enlarge the image to read my study notes: 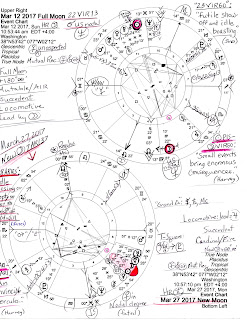 Sandwiched between the Full and New Moons of March 2017 is Spring Equinox 2017 on March 20th which emphasizes the March 12th Full Moon as the Syzygy Moon (last lunation prior) of Spring EQ 2017.

Venus remains retrograde for the month of March and turns Direct in mid-April @26Pis54, passing her shadow degree ('leaving the shadows') in May 2017.