A Brief Peek at Sean Hannity Through an Astrological Lens

Now that Roger Ailes, Megyn Kelly, and Bill O'Reilly have left FOX News, news reader Sean Hannity broadcasts his political views from atop the highest perch in conservative cable news. Some even say that Mr. Hannity is experiencing a renaissance and that the network now 'belongs' to him.

If you wish a view of Sean Hannity's natal chart you'll find his Sun @8Cap43, Moon @14Lib01, and Ascendant (Self; Physical Body) @8Pis53. As you see, his natal ASC and life are now under positive influences of the current 19 South Solar Eclipse of February 26, 2017 with its themes of: lucky breaks or wins, joyful events, pleasant surprises, and positive changes (Brady). Of course, these benefits are primarily for Mr. Hannity, not for the other guys and gal. 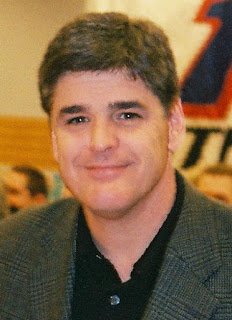 By Modified by CrazyLegsKC, original taken by Hello32020 [Public domain or Public domain], via Wikimedia Commons

Born on December 30, 1961 at 10:30 am est (Rodden Rating: A from memory) in Franklin Square, New York, Sean Patrick Hannity is of the Roman Catholic persuasion. His Sun squares natal Moon (Cap to Libra) and his Sun-Moon midpoint falls at 26Sco21. Mercury, planet of journalists and reporters, is in Saturn-ruled Capricorn as are Venus, Mars, and Saturn. In fact, Saturn (ruler of his Sun) is at a critical degree: 29Cap31 (in 11th house with communicator Mercury @17Cap00) with '30Cap' = "A Secret Business Conference" (Sabian Symbols in Astrology, Jones).

Notable is his natal Mercury with transit Pluto now in the Mercurial neighborhood and marking a period of increased power and control while his concerns over what's relevant and most efficient intensify. Secrets may be part of his daily environment as well.

As for the shape of Hannity's chart, we find a BOWL shape with radical Uranus leading the rest of his planets from the 6th house. At 00Virgo, natal Uranus also conjoins royal Regulus, the king or the kingmaker star (key phrase: success if revenge is avoided). Does any of this sound familiar? If so, it's most likely because Mr. Trump's natal Uranus in Gemini also leads a BOWL shape but from his 10th house, and Regulus conjoins Trump's natal Ascendant in late Leo (with warrior Mars @26Leo and rising). There are other correspondences between their planets as well, but it's now after midnight so this must be a two-part effort. I should never type after midnight!

May 1, 2017 Update: here's Part Two which includes Mr. Hannity's natal Sun-Moon personality blend and the themes of his Prenatal Solar Eclipse in the sign of the showman and entertainer, dramatic Leo.