Once again Stars Over Washington is happy to present for your consideration an insightful article by millennial astrologer Kevin Estes:

The Left and The Right - Reversed? 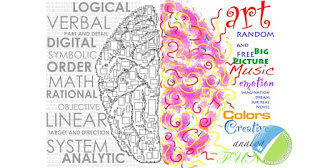 As the picture shows, the left brain is associated with these things: order, logic, math, analytics, detail, and linear thinking. The right brain is associated with art, colors, music, the big picture, randomness, emotion, and creativity. The vast majority of the things listed as right brain characteristics are things that are ruled by Neptune, and as my blog Left Wing Astrology shows, people with their Venus (economics) and Moon (culture) in aspect to Neptune but not overcome by the North Node lean to the left.

As for the research on my blog, I'll still label liberal astrological impulses as "leftist" and conservative astrological impulses as "rightist" in order to prevent confusion among readers, but this knowledge is something that should really be considered, as it would make a whole lot of sense to label liberals as the "right" and conservatives as the "left", based on left and right brain characteristics.