Was David R. Atchison "POTUS for One Day"? (13 South Eclipse)


When we speak of short-lived US presidencies we can do little better than the alleged one-day presidency of David Rice Atchison the senator who, some say, spent 24 hours as POTUS because of his next-in-line status when religious Zachary Taylor refused to be sworn in on a Sunday (March 5, 1849). James K. Polk's term ended on March 4, a Saturday, so for 24 hours the unsworn yet elected Mr. Taylor was president--unless Mr. Atchison was!

And although most historians discount the '24-hour-POTUS' Atchison's claim to fame, March 4 and 5, 1849 make for curious horoscopes for our consideration. Yet it is the event's Prenatal Solar Eclipse, the 13 South and its themes, that shed some interesting light upon that long ago political situation. The eclipse was also the Syzygy Moon (last lunation prior) of the event although being annular, it wasn't a particularly strong eclipse. Or was it? If slavery supporter Atchison as president was someone's plan, it didn't work.

Occurring on February 22, 1849 @4Pis22 (and Pisces being the sign of secrecy and confusion), the 13 South Saros Series contains sinister energies underneath with themes of 'striving for group endeavors, an urge for expansion that results in frustration, inhibition, loss, evacuation, or separation, and the possibility of constitutional crisis' (paraphrasing Brady's Predictive Astrology). Perhaps the eclipse's annular weakness helped keep the US Constitution from crisis for 'eclipses always affect history', according to William Lilly.

In addition, 13 South themes and events are to be viewed through a Mercurial Gemini lens for the initial eclipse in the series manifested on May 24, 803 OS @5Gem56--quite close by degree to the New Moon of May 25, 2017, the closest to Earth *supermoon of 2017! 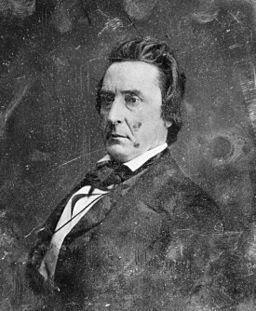 The term *supermoon was coined by expert astrologer Richard Nolle of astropro fame!