The LBJ Library website has details on the signing of the 1965 Medicare Amendment to the Social Security Act on July 30, 1965 in Independence, Missouri at the Truman Library. The Amendment also established Medicaid and in January 1966, President Johnson returned to the Truman Library and presented Harry and Bess Truman with the very first Medicare cards. The website includes black and white footage of the events (audio may be partial).

However, the Rodden Rating of LBJ's natal data is C (accuracy in question) and gives him an Ascendant of 26Leo57, the position of Trump's natal Mars rising and basically the same ASC-DESC (Leo-AQ) and MC-IC (Tau-Sco) as Donald Trump (with LBJ's natal Moon @9Vir52). Obviously, with Leo ascending LBJ's natal chart would be ruled by the Sun in Virgo rather than Mercury in Virgo as my Solar Fire v9 software gives. But however we look at him, that's a bunch of Virgo and July 30, 1965 also shows a bunch of Virgo with the first of three Great Conjunction/s of Uranus and Pluto perfecting on October 9, 1965 @17Vir10 (2. April 4, 1966 @16Vir28; 3. June 30, 1966 @16Vir06). 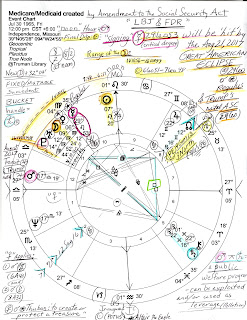 An operative 'societal' midpoint picture of the day denotes the planet of signings, amendments, bills, speeches, agreements, trading, negotiations and such, Mercury @29Leo58, as apex of the Neptune-North Node midpoint which tends toward quite negative qualities such as: a lack of communal spirit, antisocial behavior and/or exploitation (Ebertin). This would likely be financial and political exploitation, one must assume, since Washington DC and Wall Street thrive on exploitative practices.

Then with 1965 Mercury as apex planet of the Neptune-NN midpoint there were potentials for any, all, or none of: false expectations, unreliability, being let down by occurrences, secret arrangements made with others and/or deceit (Ebertin/Tyl) as President Johnson added to the benefits that FDR's New Deal programs had provided. Now in 2017, Lyndon Johnson's Great Society is again under siege by opponents of the conservative persuasion. Yet many Americans would prefer that Mr. Trump's 'Make America Great Again' slogan and actions uphold LBJ's Great Society programs rather than undermine them against the wishes of the majority.

August 2017: a 'Cosmic Blink' from a Solar Eclipse

Medicare-Medicaid's Mercury @29Leo will be 'eclipsed' by The Great American Eclipse of August 21, 2017 in the 1 North Saros Series, the 'King of Alarm' series now repeating for the first time since its Book of Revelation Fixed Grand Cross manifestation of August 11, 1999 @18Leo. You know the one, The Mother of All Eclipses (One North) which begins a new 18.6-year cycle which will end with the 19 North and 19 South eclipses of 2034 and 2035 (Virgo-Pisces).

Besides, Medicare-Medicaid's Mercury and as previously noted, the August 2017 Total eclipse @29Leo, conjoins the natal Ascendant of Donald Trump and affects his rising Mars as well while activating royal star Regulus @00Virgo, the Zodiacal sign of health and dedicated work (see chart, upper right). Quite a cosmic blink! The primary theme of Regulus has been discussed in previous posts and remains: success if revenge is avoided. All four royal stars contain cautions to be avoided or their gifts will be taken away. One example is the adage pride comes before the fall and the sort of delusion America has suffered from since World War II's victory and the much-touted belief that Washington DC can force the world into America's image.

Plus, as you know, Paul Ryan (R-WI) has dreamed of "slashing Medicaid" since his "kegger days". Best to be cautious about taking revenge, Mr. Speaker, for the law of karma will have you reaping what you sow. And being drunk is no excuse!

So here's a related video of a 2015 interview segment from the Thom Hartmann Program asking Why Do Republicans Want to Destroy Medicare?, an ideological and a financial goal which they often attempt to hide via echo chamber assertions of "saving" our social safety net programs. Because they think the American public is that stupid.

Check the above horoscope, lower right, for a bit about the Mars-Saturn inconjunct (quincunx, 150 degr) for it denotes a public welfare program (although Republicans and their wealthy donors are not their brother's keepers, y'know) but this may also be exploited and/or used as leverage in political and financial negotiations. Wealthy corporatist, banker and politician Jupiter @22Gem12 is in Corporate 8th house of Insurance, Credit and Debt and in 1965 conjoins US natal Mars...and also happens to conjoin Mr. Trump's radical 10th house Gemini trio of Uranus-NN-Sun (17--23 Gemini).

When we relocate The Great American Eclipse of August 21, 2017 to Independence, Missouri we find Medicare-Medicaid's earliest Moon position (1Vir56) at Midheaven (MC; 1Vir21), the Goal Point of the chart, and with 1965 Mercury (and the Total eclipse) there along with LBJ's natal Sun and Mars (2--4 Virgo). An additional factor in play now is the zealotry, one-sided views, and conflicts of the waxing Jupiter-Uranus opposition which times and reveals the ideological divide concerning America's social safety net programs established during FDR's and LBJ's presidencies as Jupiterian expansion and Uranian disruption tussle for control of the money via massive tax breaks for the wealthy if the Republicans and their donors have their way.

So as you see, there are many more worthwhile chart factors we could discuss but for the sake of brevity, let's not. Besides, I trust you to check them out if and as you're so inclined and share this or any SO'W posts if you will. Better yet, join the fight and do your part to save Medicare and Medicaid, programs that working and middle class Americans have come to rely upon!

For as a certain anti-LBJ 1964 presidential candidate reminds us:

Was and is that a threat or a promise?