Significant to the study of any solar eclipse horoscope is the initial eclipse that began the particular Saros Series and since the August 21, 2017 Solar Eclipse is of the 1 North Series, I'm posting both the initial eclipse (January 4, 1639 @13Cap48) set for "Washington DC" (although the city was not yet built) and for comparison's sake, the horoscope of The Great American Eclipse of August 21, 2017 which manifests @29Leo: 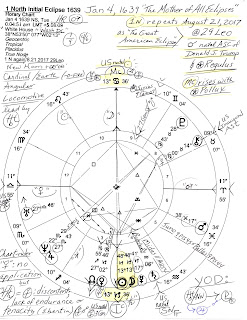 Left: January 4, 1639 Washington, DC; since The (Total) Great American Eclipse of August 21, 2017 is in Sun-ruled Leo and 1 North begins with a Saturn-ruled Capricorn eclipse it adds details to our study when we view the August 2017 eclipse through a Saturn lens and include aspects, sign, and house positions of the initial eclipse horoscope. It's doubtful that Sun-Saturn is anyone's favorite combination of planetary energies so I'll simply list some of Ebertin's correspondences for this combination for your consideration and suggest to you that on a coping level, America's natal Sun-Saturn square may be involved and require a high level of maturity, hard work, and serious attention to detail in order to deal with any health issues and events that occur:

Probable manifestations: + a difficult struggle with regard to advancement in life, little help through elderly people; working silently or in solitude. - delicate health, a secluded or solitary mode of life, compelled by circumstances to lead a modest and simple life, suppression through others, separations.

Also activated are Sun-Saturn potentials for: crisis, danger, loss of life, or a complete change in home circumstances via a move to a foreign country or different surroundings. 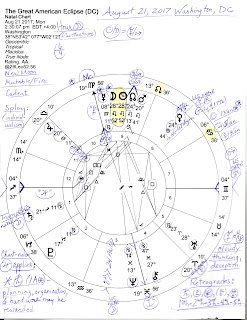 So even though there was no District of Columbia laid out in 1639, there was penned in Connecticut the First Colonial Constitution!

And whether you're in the path of totality on August 21st or not, please be sure to wear safety glasses for eclipse viewing!

Sun-Saturn info: The Combination of Stellar Influences by Reinhold Ebertin.