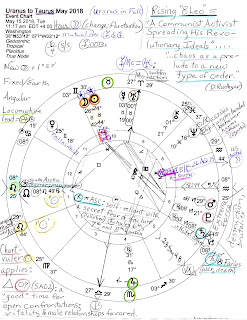 In Astrology, Uranus is considered unpredictable, erratic, eccentric, separative, electric, eclectic, progressive, reforming, novelty loving, intense, disruptive, independent, a rebel and a fighter for freedom. In mundane charts US Uranus (8Gem55) is America's 'war planet' of revolution and revolt. Coming between the American and French Revolutions, the 1781 Discovery of Uranus by amateur astronomer William Herschel is an oft-told tale and one that may soon be made more newsworthy by the fact that on May 15, 2018 at 11:17 am edt, the quirky maverick of a planet will leave Aries in the Tropical Zodiac and enter the Venus-ruled sign of Taurus the Bull. Money, materialism, possessiveness, intolerance, and greed are the negative keywords of Taurus with growth, building, designing, and stability the more positive traits usually mentioned. (Noting that it's the love of money that is the root of all evil, not money itself).

In November 2018, transit Uranus re-enters Aries, turns Direct in early January 2019, then lurches into Taurus again on or about March 7, 2019.

Uranus from Aries to Taurus; Pluto from Capricorn to Aquarius

Now as you know, with Uranus lurching through Mars-ruled Aries since 2010, we've been seeing and experiencing much of what Reinhold Ebertin describes as Utopians, blind zealots, radical reformers, fanatics, and anarchists brashly and stubbornly expressing themselves within the Collective, their ambitions often shown via sudden outbursts of energy and violence, plus, efforts to enforce their 'against the mainstream' ideas.

So how will Uranus in Taurus affect societal conditions as surely it must? Uranus is the only one of our solar system's three outer (transpersonal) planet that will change signs until transit Pluto, planet of power, wealth, and stealth, leaves governmental Capricorn and enters Aquarius while simultaneously trodding upon America's inaugural Sun (00AQ+ = POTUS in our January 20th Inauguration horoscopes--assuming America will have another president).

And then for the first time in approximately 248 years, transit Pluto reaches 00AQ00 during the third week of March 2023, retrogrades on or about June 2, 2023, then it's backwards into Capricorn (triggering 29Cap, a critical degree) for a while until power wielding Pluto, the saboteur, re-enters Aquarius on or about January 22, 2024. Transit Pluto to US Inaugural Sun (POTUS) suggests a new start or a different lifestyle than before for the Oval office occupant-in-chief. Of course Pluto breaks down in order to 'build anew upon the ruins', plus, things are always unpredictable and disruptive with Uranus, so few if any people have a clear idea of how damaged the US presidency may turn out to be as long as the eccentric Uranian Mr. Trump plays and tweets the role into laughing stock territory. (Some hidden power behind the throne wanted him there to hobble America!)

Now as you know, Pluto in Capricorn suggests a strong archetypal image of The Dictator (Ebertin) and it's interesting that America was founded while manipulator Pluto, of the invisible cape, was in the sign of Saturn-ruled Capricorn, in late degrees. However, Pluto in scientific, futuristic Aquarius exhibits a different picture entirely for a Uranian flavor is added to Pluto via Aquarius. According to Reinhold Ebertin, Pluto in Aquarius is about those displaying any, all, or none of the following expressions: a wealth of plans, a strong communal sense, the urge to reform, popularity, life advancement through the help of other people, and/or a potential for exaggerated plans and hopes.