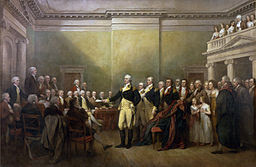 In the Old Senate Chamber at the Annapolis, Maryland State House on December 23, 1783, the Commander-in-Chief of America's Continental Army, General George Washington, voluntarily resigned his commission as leader of our forces which created the model for a US government under civilian control rather than becoming a military generalship. Although our traditional civilian leadership may or may not be the actual case any longer, let's consider the resignation's horoscope and some of the cosmic influences of the era in which this historically rare event took place near the end of 1783 while hoping for better days ahead.

Now you may wish to refresh your memory with eye witness accounts and other details of the event including the elegant dinner held the preceding night (December 22, 1783); if so, the Mount Vernon Digital Library is an excellent resource. Note that after the dinner "13 toasts were drank under a discharge of 13 cannons," as noted by Rhode Island delegate, soldier, and politician from Pennsylvania, Thomas Mifflin. This I mention lest anyone think that the number '13' and every other number were unknown as the basic components of Creation and, along with what we today call 'Astrology', was a topic of study which deepened one's understanding of the cosmic realms back in the era of America's founding perpetrated by our Founding Freemasons (which Washington and several other founders were--and some were more besides, as politicians are now.)

Ready to resign, retire, and return to his farm at Mount Vernon, General Washington arrived on December 19, 1783 in Annapolis where Congress had convened, and, happily for you and me, the historical record asserts that Congress had on the day prior elected (chosen) the manner, date, and hour that General Washington would address them and relinquish his commission. Therefore, an accurate horoscope may be set up of the Resignation of General George Washington and here you see it surrounding George Washington's natal chart with his Saturn, planet of responsibility, rising: 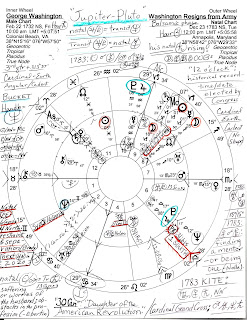 With a curious synchronicity, Jupiter and Pluto were in process of conjoining at his resignation and echoed Washington's natal Jupiter-Pluto conjunction which identifies him as one involved in vast financial enterprises and who will risk himself in dangerous situations. Yes, the 'good life' awaited him at Mount Vernon yet with the Jupiter-Pluto pairing, we think of a powerful and transformative (Pluto) General (Jupiter), a rather good description of George Washington once the Revolutionary War was won.