For the sake of comparison, and since our nation has experienced a major change of administrations in the interim, here are horoscopes of Spring Equinox 2017 and Spring Equinox 2018. Please enlarge the image to read a few basic chart notes because not a lot of text follows and I intend to post in the New Year concerning the 2018 chart: 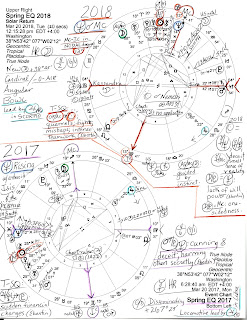 In Washington DC, the cosmic 'star of the show' that stands out in Angular fashion is 2017's Neptune in Pisces rising and 2018's Neptune in Pisces at Midheaven, the Goal Point, conjunct fixed star Achernar (crisis at the end of the river; risk of rapid endings). Astrological Neptune in Pisces denotes potentials for mysticism, secrets and leaks, scandals, pathological tendencies, paranoia, fanaticism, contagion, fraud, deceit, and/or spiritual inclinations and the Divine Source.

Here's the star of the show now in a close-up NASA pic... 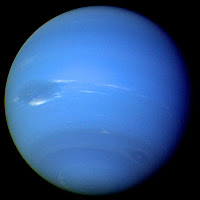