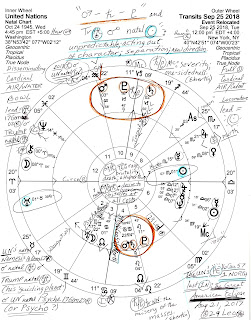 And the Prenatal Eclipse ('PE') of the UN is in the 1 North Saros Series ('The Mother of All Eclipses') in 4th house which repeated as The Great American Eclipse on August 21, 2017 @29Leo conjunct the natal Ascendant of Donald Trump and royal star Regulus (success if revenge is avoided). And since I've previously posted so often on these topics I'll not bore you with them tonight.

What do you think about the fact that they laughed at Trump during his UN speech?