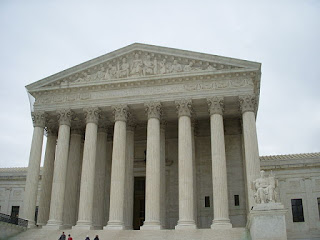 September 4, 2018: today as the congressional hearing on the SCOTUS nomination of Judge Brett Kavanaugh opens at 9:30 am edt, Judge Kavanaugh's natal Neptune @19Sco59 is his first natal planet to rise in the horoscope set for the Capitol Building Washington DC which suggests that a lack of candor will be in play. So far no birth time has been found for Brett Kavanaugh (born February 12, 1965 Washington DC) so 'noon' is used but since Neptune takes about 164 years to circle the Sun and traverse the degrees of the Zodiac, 19Sco59 is accurate enough for this general consideration of today's very important event. Additionally, 19 Scorpio has been traditionally called "the crucial point in the war between the Ego and the Supreme Will" and an "evil degree" (DeVore) which I add for those who credit such things.

So as you know, astrological Jupiter, societal planet that, along with restrictive Saturn, describes the America's checks and balances form of government, also has judgment within its astrological purview, as does Saturn with its demands for accountability and responsibility. I refer to today's SCOTUS hearing's Jupiter @17Sco39 as it nears Kavanaugh's natal Neptune, a transit known for such potentials as pretense, illusion, fanaticism--and for the paranoia engendered by the prospect of an anti-abortion, tie-breaking judge being placed on the SCOTUS bench. Now this post isn't for debating the merits or the immorality of abortion yet I do not think a bunch of old white men have a right to insert themselves between a woman, her doctor, and her family, if involved, in such a difficult private decision. So that's all I shall say here.

But there is another thing I can say astrologically: that today's Jupiter @17Sco39 precisely opposes Kavanaugh's natal Jupiter @17Tau56 ('noon') which indicates a period when impressing others is difficult (probably only Democrats are described here by transit Jupiter) and discouraging comparisons are made against him. The transit also suggests that the judge is feeling discontent with his wealth and level of achievement and intends to improve his social status (which makes sense considering this is a job interview--and pretty much in the bag if Republicans and their billionaire backers have their way). Yet Jupiter in Scorpio in opposition says that if he and his backers are wise they won't push too hard for this nomination or take its eventual success for granted especially since Brett Kavanaugh's recent poll numbers with the ladies amount to less than zero. See The Historically Unpopular Brett Kavanaugh. His past legal work in the Bush White House is chilling enough as it is so it's no wonder that Republicans have hidden as much of Kavanaugh's paper trail as they can.

Now other chart factors apply, of course, for this post is only a brief Jupiter-Neptune consideration of today's Kavanaugh hearing but I'm calling the duo the nomination's cosmic imprint by the planetary pair of speculation, grand or inflated dreams, little sense of reality, get-rich-quick schemes--and with potentials for fraud and/or overblown efforts. And thus will the Brett Kavanaugh nomination to the Supreme Court always be.

Yet powerful hidden forces are determined to shove him onto the SCOTUS bench to overturn laws and otherwise gum up the US legal system so where does such an influence show in the astrological picture? One place is in Kavanaugh's Prenatal Solar Eclipse which repeats on January 6, 2019 in Saturn-ruled Capricorn with its theme of 'joining unusual groups and gaining a great deal from them' (Brady). If you wish, read more in a previous post: Astro-Notes and an Eclipse for Judge Brett Kavanaugh.

Public domain photo, above: US Supreme Court Building Washington DC completed in 1935 during the first term of FDR.