Below is a bi-wheel of Nancy Pelosi's two stints as Speaker of the House of Representatives circa 2007 (January 4) and 2019 (January 3). Charts are set for noon, the symbolic opening of a new Congress--the 110th in 2007 and the 116th in 2019. Notes are penned on if you care to enlarge the image, and midpoint pictures in force for both stints are listed, below, along with prominent 2019 conjunctions to the 2007 planets although your eagle eye may spot more: 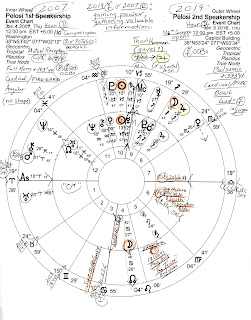 As you see, 2019 Mercury conjoins 2007 Pluto (notated in the text, above, and on the chart, upper middle; 2019 Saturn conjoins 2007 Mercury denoting serious training, instructions, and broadening of skills; responsibilities increase, and delays are involved with Mercurial things such as communications, planning, commerce, trade, and travel (Trump Shutdown?).

2019 Neptune @14Pis08 nestles between the 2007 Uranus-North-Node midpoint and pair of radical, anarchistic, progressive politics in the 12th house of Politics, Large Institutions such as Congress, and Karma which forms a picture of potentials including: meetings with unusual people (new congress members?), undermining of associations, being suddenly deceived by others, and/or people who are easily impressed by others. Note that this position of nebulous Neptune is the natal degree of the Republican Party (1854) which had its final exact Neptune Return on December 29, 2018. Plus, 2019 Neptune conjuncts 2007 Uranus which suggests changes in society are due but with confusion and disorientation involved as technology conflicts with ideals.

This looks to me like a cosmic picture of Republicans undermining House Democrats (old news!), in particular the progressive wing of the party and - tiresomely - the pro-people policies they and Nancy Pelosi support (to the extent that she does).

And finally, 2019 North Node conjoins 2007 Moon 27Can42 suggesting major publicity, emotional and/or spiritual ties between the congressional ladies, families and children in attendance at both events, and Speaker Pelosi's expression on January 3, 2019 of this being the 100-year anniversary of Women gaining the Right to Vote!

Email ThisBlogThis!Share to TwitterShare to FacebookShare to Pinterest
Political Astrology,Astrology,Politics Democratic Party, Nancy Pelosi, Speaker of the House, Speaker Pelosi 2007 and 2019, US Congress