Having stationed and turned direct on August 11, 2019 @14Sag30 (9:37 am edt), transit Jupiter moves on toward his Shadow Degree, the point in the Zodiac where he stationed and turned retrograde ('Rx') on April 10, 2019 @24Sag21. Leaving his own shadow period frees Jupiter functions, conditions, and people to 'move forward' more confidently with plans and activities such as politics, banking, investing, corporate mergers, religion, education, exploration, military pursuits, and, in general, the overstepping of boundaries. As you know, Trump is a large Jupiterian figure and expansive America is Jupiterian so there is that resonance between us which could be used wisely but instead is used against us.

In the DC Horoscope, below, I have not littered it with Trump natal or other placements even though his natal planets are all over the chart. One example: rising at the Moon-ruled Ascendant (23Can39) is his natal Saturn, then natal Venus, so issues of his authority, authenticity, and accountability will arise on or about November 5th with transit Pluto at a critical degree (20Cap54) opposes his Saturn suggesting an ongoing period when authority is met with resistance, his life structures are under assault and/or are altered, and he experiences negative conditions with few options for improvement. Pluto opposing his Venus suggests an unfavorable time for legal negotiations, diplomacy, social pursuits, and personal relationships. In fact, there may be danger from allies or partners, and he should avoid aggressive maneuvering (fat chance!).

Then, at IC (7Lib45), the Foundation of the Matter, is his natal Neptune-Chiron-Jupiter trio of speculation, waste, get-rich schemes, fraud, grand visions, and inflation. This placement at IC pretty much reveals itself, don't you think? Plus, the IC of any chart also contains "Endings" vibes so there's that at the root of it all when it comes to the fantastical realms of Trump: 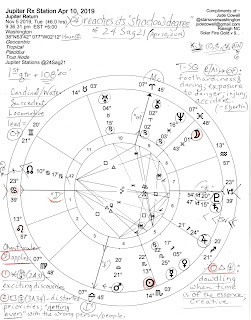 As for the rest--the high-flying Kite pattern of success, the Locomotive shape of planets led by warrior-activist Mars @21Lib20 in 4th house, Mercury Rx in Scorpio conjunct Trump's natal IC, the Pisces Moon as chart-ruler applying twice (see lower left), the dynamic T-Square with Mars as apex planet detailed (upper right), I shall leave you on your own. If my scribbles fuss you up I suggest calculating the chart yourself for a fresh copy. And in my haste to leave the chart less scribbled upon than usual, the Syzygy Moon (4Sco25; last lunation prior, the October 28th New Moon) is not listed but falls in 4th house between Mars and Sun, and the Jupiterian cosmic event's Prenatal Solar Eclipse is not penned on which is a shame since the 12th house North Node @10Can17 points directly toward the eclipse which perfected on July 2, 2019 @10Can37 in the 3 North Saros Series.

This puts 3 North's themes directly upon America's path made more personal to the American people since its degree is squarely between US natal Jupiter (5Can56) and Sun (13Can19 = POTUS)--and qualifies as our 'birthday eclipse' of 2019, its themes coming to fruition and needing to be dealt with more directly in November into December, if not before. Obviously, holding Trump accountable is on the menu (Saturn-ASC) by the end of 2019 and into 2020 when the January 12th Saturn-Pluto Conjunction @22Cap46 lands upon the natal Vertex (22:51) of his nibs and suggests 'fated encounters' and 'changing work conditions'.

Now we know that history doesn't repeat but it does tend to rhyme and 3 North is a difficult series suggesting thoughts that can become obsessive. Large plans are wanted which can have positive results but "don't get carried away", and there may be news involving young people (refugees?) (Brady). Of course, we've been experiencing a 3 North period since June 2019 and may now see a fulfillment or culmination of its background influences which will last until at least December.

A Related Post: When Jupiter Returns to His Spring Equinox 2019 Position (24Sag40).

Interesting that November 5, 2019 also happens to be a General Election day in the US: https://en.wikipedia.org/wiki/2019_United_States_elections jc