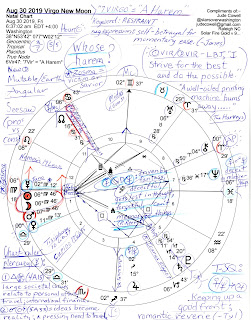 Image: August 30, 2019 New Moon @6Vir47 6:37:02 am edt Washington DC; it's a Solar Hour with Mercury exalted in Virgo as chart-ruler and fixed star Zosma (victim or savior) emphasized by Mercury, Sun, Moon, and Mars in Virgo--and with a small stretch we may include Venus @11Vir13 in Zosma's net as well.

Of course, Mercury is the planet of young people (puellas and puers alike) along with The Speedy One's many other roles including messenger, speaker, teacher, student, planner, trader, juggler, thief, liar, and tweeter.

Now, lower left, you see that chart-ruler Mercury applies twice: 1. trine Uranus (4A15) denoting large societal issues that relate to personal affairs, travel, and international finance; and 2. conjunct Mars (5A33) suggesting ideas that become reality, and having a pressing need or urge to travel. This could indicate that some type of escape is involved.

And speaking of trading, this evening as I type (August 14, 2019) the stock market has jumped off a cliff again today (down over 800 points--or was it pooshed?), a Trump recession seems to be in the cards, Hong Kong protests keep heating up under threats from the government of China, and many other difficult conditions and situations are bubbling and boiling over across the globe. Because of all the chaos we're meant to lose faith in government all together but I know the ineptitude is being done on purpose. Meanwhile, it's become obvious to more and more people that Trump was installed in the White House in order to implement the end of America's global leadership by greasing the skids, gutting the government, and sabotaging our nation. Voters in 2016 were warned about Trump but many did not or could not listen. Now our nation and people are in danger on various levels with no one at home in the White House who is capable or willing to do what needs to be done.

Even so, let's not belabor the New Moon of August 30th in critical Virgo, sign of The Virgin, and indicative of the lunar phase when new seeds (ideas, plans) are planted which should come to fruition at the next Full Moon of September 14th @21Pis05. And there's little need to mention the several references to the Epstein-Barr-Trump-Prince-Andrew--?-- embroilment with the many young victims (Mercury) of their sleazy 'attentions' for such may be found in the horoscope for those who care to enlarge the chart and look. (A good example: New Moon '7Virgo' = "A Harem"...whose harem would that be?)

And yet we may wish to consider the dynamic T-Square between the Venus-Neptune opposition square expansive Jupiter in its own sign (4th house) with its 'keeping up a good front' and 'romantic reverie' vibes (Tyl) although admittedly I cannot see how much longer the Trump Circus (enabled by the complicit GOP and others) can continue without collapse considering how quickly things are shifting now--and that includes Trump's denial of involvement in the Epstein affair.

But then, as usual these days, there's gas giant Neptune Rx in Pisces in the 7th house of Relationships and Partnerships adding its usual delusions, deceptions, fraudulent schemes, bubbles, and fairy dust to everything it touches which resonates well with Trump's problematic Mercury-Neptune square of lies and misconceptions--for the Virgo New Moon's Mercury-Neptune quindecile (165 degrees of obsession-compulsion) describes someone deceitful who tends to get lost in thought, can't remember or memorize things, and is driven by fantasy and illusion.

So yes, we're in the midst of dark times and any New Moon is the dark phase of the Moon when things 'go bump in the night' and someone is up to something.

Of course, in Washington DC Politics, 'night bumps' are a time honored tradition so for this particular Mercurial lunation you may wish for more information so have a listen to The Scottish Astrologer's video, Virgo super black moon and Pisces micro harvest moon - Major Warning from Above (30th Aug/14th Sept):

No mincing of words here!