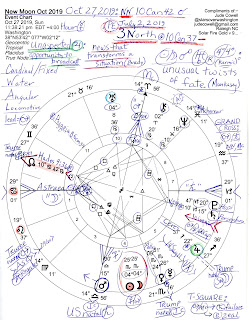 Here you see the DC Horoscope of the October 27, 2019 New Moon @4Sco25 in 4th house opposed by erratic Uranus Rx @4Tau36 in the publicly visible 10th house. The 4/10 security axis is activated during this Hour of Mercury (11:38:21 pm edt Washington DC) as is the Taurus-Scorpio polarity which suggests the financial, investment, and corporate matters and issues.

Now the Sun-Moon-Uranus trio forms a midpoint picture of potentials for 'unusual twists of fate' (Munkasey), and/or 'sudden conflicts or upsets', 'separation', and 'an urge to act independently' (Ebertin). 'Sudden developments' may also be expected (Tyl)--not that any of this would be anything new considering recent events in US Politics.

But the thing is, New Moons if prominent can affect events much like solar eclipses which tend to disrupt, cause changes of direction, and uncover inconvenient facts, secrets, or scandals in similar fashion to quirky Uranus. And of course, this is why eclipses are often called 'wild cards of the Universe' and have karmic or fated vibes to them. So after reviewing this New Moon horoscope, I believe that this particular lunation in intense, Big-Business Scorpio (sign of spies and surveillance) is capable of such disruptive influences and directional changes, plus, with its Ascendant ruled by the Moon, fluctuations, changes, and publicity are givens.

So if this is the case, then deep insights that get to the root of problems, and avoidance of expressing the negative traits of forceful Scorpio will aid society's karmic progress within the conditions and problems we now face. As you know, those negative traits are vengeance, cruelty, betrayal, hatred, and retribution and will be much more difficult for some players to avoid expressing than for others. And my suspicion is that things will become even clearer by the light of the next Full Moon on or about November 12, 2018 @19Tau52--in Trump's natal 9th house of Foreign Lands and Legal Affairs--a good place for Luna's revealing rays to shine.

Now admittedly, there's a ridiculous amount of information nestling within this New Moon horoscope but it's simply too late to type it for you now. Even the tempting Grand Cross involving Mars conjunct US natal Saturn and the New Moon's IC, and Saturn snuggling near Pluto (6th house) cannot inspire me to perpetrate more typing at this late hour (1:20 am edt). Suffice to say that harsh conditions surround us.

Yet mention must be made of the 12th house (of Politics, Karma, Self-Undoing, Large Institutions) and the North Node posited therein (future direction; public contacts) for it points directly at the Prenatal Solar Eclipse ('PE') of this New Moon, a solar eclipse which you may remember manifested on July 2, 2019 @10Can37 in the 3 North Saros Series. 3 North is the PE of the 9/11/01 attacks and also of 1929's Black Tuesday and it tends to bring 'news that transforms a situation', 'over-excessive energy', and 'large plans that are undertaken' which is okay if folks 'don't get carried away' (Brady). Of course, as with anything in life or astrology, eclipse energies can influence events positively, negatively, or some mixture of both.

And since we've had a plethora of transformative news of late what with the ongoing impeachment inquiry in Congress, whistle blowers, and diplomats coming forward to testify against Trump, I'll leave the eclipse themes and the Scorpio New Moon horoscope in your capable hands for now, dear reader, for I do trust you implicitly, you know.

Please Share If You Care, and you're welcome to leave your on-topic comments or queries beneath this post as you wish. Just remember--no ads for your website or services for they will not be published. jc

wow so much in that chart ...all that saturn pluto build up with the mars is so current white house ..Uranus has been hovering around NYSX all important natal Venus for a few months now , the markets have been understandably shakey but none the less still high flying considering the current chaos ...maybe this new moon 's emphasis on that uranus may have much larger economic consequences ? ...its all so hard to pick with Uranus & with a Uranian president that seems to slide from scandal to scandal backed by a republican party that refuses to see anything that might possibly affect their grip on power including climate change or wide spread in your face corruption ( note Pluto & Saturn currently transiting the Republican party 4th house) I'll be keeping my eyes wide open for this one .

Thanks for sharing your thoughts zeebling much appreciated! Yes this is quite a chocked-full chart I agree and with markets in the sights of disruptive Uranus, plus, Saturn-Pluto's compression and harshness getting stronger. Actually even by itself, Saturn in Capricorn is never good for markets and much *propping up* has already occurred. As for the Wall Street casino, timing is their thing--they'll crash when international bankers are ready. Such a karmic time we live in, Jude

That Taurus Full Moon may - *may*, and what I wouldn't give for a birth time! - conjunct Elizabeth Warren's natal Taurus Moon as well. With her exact Sun/Uranus conjunction in the first degree of Cancer, she is every bit as Uranian as Trump - but in a different, much more selfless way; with her emphasis on Cancer and Taurus she is a bit of a Uranian Ceres figure - she can both make the crops bountiful or salt the earth, or both.

I have seen other psychic predictions that say November is "gonna be lit" and this New Moon just confirms it. It's going to be an interesting Thanksgiving around family tables this year!

https://www.nbcnews.com/politics/politics-news/rudy-giuliani-butt-dials-nbc-reporter-heard-discussing-need-cash-n1071901?fbclid=IwAR0WS7Drmo7gkTOZ0at8oG0ahiwA2yEizFUI_vyoqwnWRld74YTACVm97XI This seems relevant to the Eclipse that will happen tomorrow.