April through October 2019: the Sun-Uranus Cycle 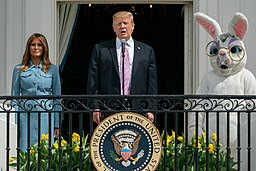 October 21, 2019: With the Sun in late Libra about to oppose erratic Uranus in early Taurus by transit on October 28th (4:15:10 am edt), a consideration of the Sun-Uranus cycle seems appropriate especially since the fellow now playing the POTUS role, Donald Trump, is a Uranian chaos-creator with his natal 10th house Uranus oriental in Mutable, changeable Gemini behaving as his whimsical, disruptive guiding planet. And of course, Trump is an original, a Sun-Uranus person with only his Gemini North Node snugged between them which partially explains his ability to excite (Sun-Uranus) the public (North Node) with rallies and disrupt with tweets--with Sun representing a leader and his ego thereof.

The cycle began on April 22, 2019 when the Sun and Uranus conjoined energies @2Tau31:40 along with transiting health asteroid, Hygeia (2Tau42) so in this post, we'll take a look at US events on and within a couple of days of April 22, 2019. As you see in the photo, above, the annual White House Easter Egg Roll was held on April 22nd with a costumed Easter Bunny big as life (on the right, not center) in attendance. We can only hope that the fantasy-prone Mr. Trump wasn't fooled into believing that one of his imaginings had come to life like Jimmy Stewart's 6-foot rabbit Harvey. "Six-foot-three-and-a-half-inches--let's stick to the facts," says Stewart's character, Elwood P. Dowd. If only Dowdy Donald would!

Now as you know, all planetary conjunctions are like New Moons which time the beginning of a new phase of activity, and their oppositions, like Full Moons, represent the culmination, awareness, and fulfillment stage. So for the Sun-Uranus cycle of 2019, April 22 to October 28 encompasses the current cycle from 'New to Full'. This indicates that something Solar-Uranian begun in April will come to fruition or end in late October so a search for US and global events of April 2019 would be fruitful for the curious while keeping in mind current events and those over the next few days of October 2019--and until late April 2020 when a new Sun-Uranus cycle begins. (Primarily this post refers to US events which are on-the-boil just now, not that others aren't.)

Another related event occurred on April 22, 2019--the announcement that new cases of measles were reported, amounting to the 2nd worst outbreak in the US in nearly 20 years with 22 states affected. Of course, "nearly 20 years" points toward the Jupiter-Saturn cycle and perhaps the Nodal Cycle of 18.6 years so their involvement could be notable. And as mentioned, health asteroid Hygeia was spotlighted by the April 22nd Sun-Uranus conjunction with astrological Uranus often representing the 'new' or the 'novel' and the goal-oriented Sun activating public announcements and events.

In addition, two other events around April 22nd were: the redacted Mueller Report was released on April 18, 2019, and on April 23rd, it was reported that 156 people across 10 states were hospitalized due to consuming E. Coli in ground beef, another Sun-Uranus-Hygeia event. (I'll mention here that the health of Donald Trump is a constant topic of discussion and a deep concern to us all but you already know this!)

As for Politics or Business, let's consider the willful, unpredictable Sun-Uranus pair within those realms; here are the pair's potentials as quoted from Michael Munkasey's Midpoints: Unleashing the Power of The (Your) Planets which helpfully provides the Hegelian form of analysis:

Thesis: Political changes that shape the quality of all efforts; reforms which initiate changes to authority or power; legislation mandating major reforms in policies; revolutions which bring fundamental changes.

Antithesis: Rebellions designed solely for the removal of an existing leader; the changes which accompany upheavals; rule makers or interpreters battling decision makers; a contrary head of state with unusual habits.

Now I'm not emphasizing any of these potentials as 'what we're now dealing with' in Politics and Business because I'm certain that you, dear reader, can ascertain them for yourself and have opinions of your own. But I will add that in the physical realms, Sun-Uranus relates to 'blood pressure abnormalities' such as an overweight man can trigger within himself while furiously raging against those who stand in his way, who defy him, who testify against him, and/or who inhibit his life-or-death need to follow Putin's agenda to sabotage and collapse the United States of America. (Note that to Sun-Uranus, Ebertin adds, "heart neurosis.") As for the House's current impeachment investigations of Donald Trump, some amount of information in the Mueller Report has been recently mentioned within the public discourse and could certainly come up again as depositions are given to various committees.

Video (6m40s): The phone call that could get Trump impeached.

Now naturally, other planetary factors are in process of influencing conditions and events within the April to October 2019 time frame, either in support of Sun-Uranus potentials, or against them. One obvious cosmic factor of influence is the unpredictable Scorpio New Moon of October 27, 2019 @4Sco25 opposed by erratic 'wild card' planet Uranus Rx--for New Moons can influence events and reveal inconvenient facts in similar fashion to 'wild card' solar eclipses. So this particular Solar-Lunar cycle begins with the seeding of new ideas and plans just as a Sun-Uranus cycle culminates and unpredictable events 'led' by Trump continue to affect and influence the Collective--and the rest of the world--as his authority and integrity are challenged by the powers that be.

Therefore, we may expect that some measure of fulfillment, full awareness, and/or culmination will occur under the revealing rays of the Taurus Full Moon (19Tau52) of November 12, 2019 which perfects within Trump's 9th house of Foreign Lands and Legalities and, looking ahead, we find that a new Sun-Uranus cycle begins during the last week of April 2020 in the 6-to-7-degree range of Venus-ruled Taurus.

A Related Cosmic Event: 2019 Halloween: Mercury Rx Is King of the Fairies; plus, in review there's Uranus to Taurus: Nature's Revolution.