Is This a Haunting Solar Eclipse from 1777?

Having just declared independence from Great Britain's King George III as of July 4, 1776, our wet-behind-the-ears democratic Republic might not have seen coming an eclipse of US natal Sun (13Can19) quite as soon as 1777 but that's just what the Cosmos held in store for America, her founders, and her populace. An eclipsed Sun, whether signifying goal or personality, is cosmically marked for ill or good, or at the least, an imperative must be carried out in order to successfully reach a goal if karmic progress is expected or desired. Of course, both benefits and setbacks are often part of such a solar picture as well relating as it does to the solar archetype of the hero's journey and its struggles and pitfalls along the way. We may certainly place George Washington in the starring role.

Now the particular Solar Eclipse in question manifested on July 4, 1777 at 7:23:44 pm LMT @13Can10 - America's first birthday! - and I'm setting the horoscope, shown below, for Philadelphia, Pennsylvania as the capital representing America as a whole during that historical era. (Follow the 1777 link, above, for a list of historical events.)

This lunation occurred within the 14 North Saros Series with themes of 'a peculiar turn of events, despair, illness, unexpected happenings in finances, confusion in relationships, a draining of energy'--there's more which can be read in a previous post concerning Valley Forge. For you see, this 1777 manifestation of a 14 North is the Prenatal Solar Eclipse ('PE') of General George Washington's and the Continental Army's Winter at Valley Forge, a period of hardship, misery, cold winds, bare feet, and illness.

Perhaps here we should note that it's been 8 years since the last occurrence of a 14 North Eclipse @2Sagittarius (which you may remember as the 'Sequestration Eclipse' of November 25, 2011 and the peculiar formation of a 'Super Congress'); the next 14N will perfect December 5, 2029 @14Sagittarius.

So my primary point for this post is that, considering Astrology's sensitive degrees and how eclipses work through history especially when fixed stars are involved, (US natal Sun conjunct Sirius, for example, plus other stars penned upon the chart, below), it seems significant to me that America's natal Sun @13Cancer (July 4, 1776), a critical-crisis degree, continues under the sway of 14 North themes particularly as they applied to events of 1777 for it isn't as if we can ever erase our collective history from our psyches or from our personal genetics if we descend biologically or idealistically from America's Revolutionary era.

At least as a Child of the Revolution I know I can't erase such history, and this is one of the several things my genealogical research of ancestors has shown me. So until further notice, 13 Cancer remains our national Sun degree of leadership (substandard as it is these days) and the 1777 Solar Eclipse comes along with it--is cosmically attached to it.

Please enlarge the image if you wish to read my study notes: 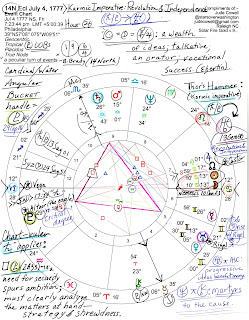 Now one of the reasons I decided to publish this particular eclipse chart tonight is the restrictive Saturn-Pluto Conjunction @22Cap46 coming on January 12, 2020 (a new cycle of their energies suggesting a struggle for freedom). The struggle is intensified by the fact that, as you can see, the 14 North eclipse brought with it a karmic imperative, a Thor's Hammer pattern, aka, a Fist of God, between the Saturn-Pluto square (destruction of the existing order) and at apex, independence-loving revolutionary Uranus the Rebel @13Gem00, America's 'totem planet' of war and revolt. As a midpoint picture we have Saturn-Pluto = Uranus with potentials for: 'brutal efforts to start a new order; an attack, regardless of possible losses' (Tyl).

So although there are differences in the quality of the struggle for freedom then vs now, it is no less a karmic imperative to do battle with the forces and entities that oppress us and this very much includes the cyber war under which we now struggle along with the threat of worsening conditions. Yet there is a major difference: despair is not an option!

And so, dear reader, if you can and if you dare, please search the eclipse horoscope to "clearly analyze the matters at hand" (see Saturn-Pluto, lower left) because rhyming concerns of historic proportions have found us again. Or better yet, skip the chart and spring into action before the war for independence from foreign control (Pluto out-of-bounds and abroad!) is lost and Our America is forever altered.