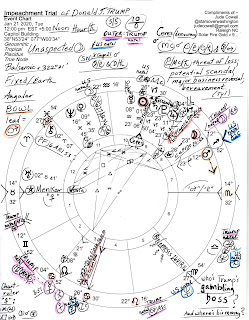 Update January 19, 2020: ABC News announces 1:00 pm est as the opening time of the January 21st Senate Trial. This puts 3Gem28 on Ascendant and 11AQ06 at Midheaven. A few planets change houses: Moon from 8th into 7th, Venus from 11th house into 10th, Chiron from 12th to 11th, and Sun and Mercury join Saturn and Pluto in 9th house from 10th while 9th house Jupiter you see in the chart below moves into the corporate 8th house. North Node leaves 3rd to move into 2nd house and only the Moon changes degree from 23Sag28 to 24Sag00; Mars continues to lead the tilt of the BOWL shape of planets which denotes 'advocacy of a cause' or 'furtherance of a mission' (Jones); Mars in Sagittarius enjoys the fight and has a need to convince others of his ideas.

Born with testy Mars rising, we should note that transit Mars heads toward Trump's natal Moon (exact February 3: an energetic but unfavorable time for pushy behavior) and forms an opposition to his natal Sun (exact February 5: urge for self-preservation, ego competition, conflicts); someone helps with problem-solving (Mars trine natal Mars exact February 11), but there may be disappointments and leaks on or about February 24 (Mars square natal Neptune). The month ends with Mars opposing Trump's natal Mercury on February 29 (hectic events, rash actions, anger, hostility, criticism, sarcasm, and a potential for injuries).

Horoscope: Trump Impeachment Trial January 21, 2020 12:00 pm est Capitol Building Washington DC; Hour of Saturn, the lawmaker, task master, lesson bringer, and planet of accountability. As you see, transit Saturn opposes Trump's natal Saturn on January 21st and transit Pluto will precisely oppose his natal Saturn on February 13, 2020. Therefore, abuse of power issues abound, plus, silent activities are suggested by the presence of the Saturn-Pluto duo. As you know, Senators must sit silently and listen, and their historic procession delivering the Articles of Impeachment from House to Senate seemed a very Saturn-Pluto affair (similar to Masonic processions--and there they slowly marched in the symbolic heart of the Masonic temple we call the Capitol Building!).

Then as you see in the chart, the star of the Unconscious, Menkar, rises (14Tau32) which is the same Ascendant sign, degree, and star as the Oath of Office on January 20th every four years. Obviously, Trump's taking of the presidential Oath to preserve, protect, and defend the US Constitution, and charges that he has not kept, does not and will not keep, the Oath, is what the trial (Ascendant, the What Point) is all about, plus, Trump's obstructionism of documents and witness testimonies.

At Midheaven ('MC'), the Goal Point of the chart and trial, is 26Cap30 which hosts US natal Pluto Rx (27:33) just as at noon on our Inauguration Days. We can thank FDR in 1937 for changing our nation's inaugural date from early March to January 20th which placed US natal Pluto atop the chart with Menkar rising. To me this seems like power and control as the goals with 'saying what must be said' as the task (Menkar--like Jonah and the Whale). This the US presidency as mouthpiece, bully pulpit, etc.

Meanwhile, chart-ruler Venus in compassionate (or shady) Pisces makes three applying aspects: 1. sextile Jupiter suggests a favorable time for social and political activities and events; 2. square Mars adds energy to the proceedings and conflicts, and indicates competitive spirits that can become aggressive; 3. conjunct Neptune denotes people within the environment who are mysterious, elusive, disguised (Russian or other foreign agents on the scene?), and/or are difficult to pin down. Lots of photographs are taken and are passed around (Trump posing with __, __, and __? surveillance photos?), and success with abstract thinking is a potential.

Well, that's it for now because I hesitate to spend much time on this horoscope because the trial date can always change. Leave your insights and comments concerning the horoscope or the situation with this post as you wish--on-topic only! And Share if you care--it's encouraging. jc

JC, thanks for doing this, it helps me not to feel so hopeless. There does seem to be an air of apathy. I feel that the best thing to do is contemplate and be grounded.

The GOP keeps bringing up 1998, but it doesn't compare. The Senate Impeachment Trial doesn't even compare to Watergate/Nixon. Where have all the true patriots gone, who put country before party?

So much secrecy and lying under oath by the GOP. What is the rush, what a grueling schedule? The chief Justice will let his legacy crumble bc he owes #3 big time. So many crimes that aren't covered like money laundering, abuse of power, etc.