In His Greatest Role Trump Plays King Cyrus the Great! 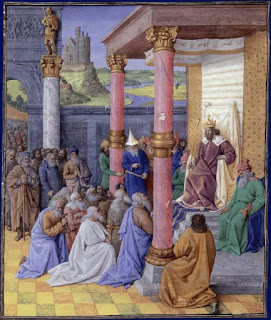 
As you know, in ancient times Cyrus the Great, King of Persia (the land westerners arrogantly call, Iran), freed the Jewish captives from Babylonia and allowed them to migrate home and build The Temple in Jerusalem.

And perhaps you also know that American evangelicals and Israel's Benjamin Netanyahu have linked Trump to King Cyrus based, one presumes, on his alleged "chosen one" status and his 2018 announcement of the relocation of Israel's capital from Tel Aviv to Jerusalem, thus fulfilling the Biblical 70-year prophecy of the fig tree. (State of Israel founded May 1948 + 70 years = May 2018.)

At least this is the sort of thing those using Trump as a tool are telling him to further their arrogant imperative to rush God into ending our corrupt world. To me it's the destructive spirit such people follow that leads them - and the rest of the world - to self-destruction. Yet in spite of their druthers, they are not the boss of God!

Plus, a comparison of Trump to King Cyrus falls woefully short once immigration issues are inspected more closely for we know that Trump's record on immigration, immigrants, and refugees is tattered to shreds by his cruel tactics and he's shown often that his intolerance of others knows no bounds. Alternately, King Cyrus was known as a promoter of human rights (a foreign concept to Trump) and as a "tolerant monarch" and while Trump thinks of himself as a monarch, exhibiting tolerance toward others does not apply to malignant narcissist Donald Trump, the Insulter.

Well, that's my soapbox complaint on the matter. Because it occurs to me that when entities read prophecy, then set about manipulating people and events in order to make it appear that the prophecy is being fulfilled, the world is being head-faked, m'peops! So I pray that we can restrain the destructive urge to lemming ourselves en masse over a cliff with Pied Piper Trump tweeting the tune like the delirious Bacchus figure he is.

Thanks Jude, that makes perfect sense.. even a sort of a messianic self belief

Precisely Nick plus his natal Mercury @8Can51 conjuncts Alhena 'to have a mission'. :(

Well stated history lesson! Here, here! Get back on the soapbox, for we desire more!!