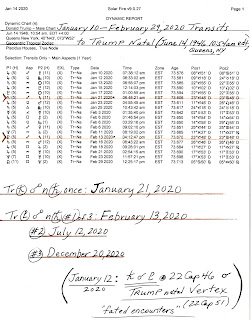 Trump's Troubles: Letting go, Walking Away, or Brazening It Out

January 14, 2020: Knowing no confirmed opening date for the Senate impeachment trial of Trump in order to set up a horoscope of the proceedings, here are Trump's current transits instead.

But like a ray of sunshine, Senator John Cornyn (R-TX) said on Monday (1/13/2020) that "it feels like" opening arguments could begin on January 21st which would be an appropriate date since that is the very day that transit Saturn, planet of accountability and karma, opposes Trump's natal Saturn, once and only once. As you see, this opposition is highlighted on the transit list (done before I read of John Cornyn's 'feelings' about the matter) along with another titanic transit of karma affecting Trump's sense of responsibility and realism on February 13th when powerful Pluto opposes Trump's Saturn--the first of Pluto's three oppositions. (2. July 12, 2020, and 3. December 20, 2020.)

So Trump's karma, the natural law of reaping what's been sown, suggests yet another year of problems piling up for him as rigid authority figures expect 'too much' from the erstwhile culprit (and his Republican sidekicks). Will Trump's troubles become more real to him once the trial opens, perhaps on the very day that Saturn opposes natal Saturn? Well, Saturn is the planet of reality. Plus, how karma-on-steroids can it be that the Great Conjunction of Saturn and Pluto exact on January 12, 2020 @22Cap46 directly hit Trump's natal Vertex?! Fated encounters, changing work conditions, endings, and/or a wish fulfilled are the possibilities.

Then taking the primary transits to Trump's natals as a whole, there are suggestions of letting go (Saturn inconjunct natal Sun; Jupiter inconjunct natal Pluto) and even a strong hint of walking away from a power position that has turned sour (Pluto inconjunct natal Sun--number three of five, an ongoing potential). Obstacles continue to mount (Jupiter sesquisquare natal Mars) yet a measure of confidence appears or reappears on or near the day that Saturn trines his natal Midheaven on January 25th. However, his confidence may turn out to be the usual pie-in-the-sky fantasy inspired by Trump's natal Mercury-Neptune square since heavyweights Saturn and Pluto are seriously bombarding natal Saturn in tribal Cancer (bringing his supporters into the Saturnian picture) while dredging up his past actions, unsavory as they may be. Yes, this is a period when correcting past mistakes is demanded by lesson-bringer Saturn, here wearing his legal eagle cap, but as we've been told, Trump never makes mistakes!

And so for Donald Trump, February 2020 is filled with frustration over restrictions (Uranus semisquare natal Uranus, his guiding planet), tensions, separations or breakdowns in relationships (Saturn opposing natal Venus--number one of three), a lack of deliberation and/or of common sense, making excuses, expressing cynicism (Jupiter square natal Jupiter), letting go of goals and taking a new path (Jupiter inconjunct natal Uranus--number one of three, an ongoing potential), a continuation of confusion and the feeling that his life is out of control, his rights are being eroded, and a lack of freedom plagues him (Neptune square natal Uranus--number three of three).

Last but not least, February 2020 ends for Mr. Trump with potentials for unrealistic expectations, disillusionment, and disappointment via the Nodal Axis, head and tail of the dragon, squaring his natal 2nd house Neptune so perhaps his fervent fever dreams (Neptune) of keeping his financial activities (2nd house) well hidden will be dashed as the Nodal Axis suggests public scrutiny and the square implies his inept, impractical responses that will help to spotlight his subversive efforts to hide the truth.

The first thing I did after listening to the Rachel Maddow interview of Lev Parnas was come to your page to catch your insights here. WOW! It feels kinda like it did when John Dean testified in the Nixon investigations! Here's finger's crossed for a 'sudden change in working conditions' for Donald John Trump.

Here's a link to the post with the Senate Impeachment Trial horoscope displayed (unless the schedule changes):