April 24, 2020: Below is the 'noon' Horoscope of FEMA, the Federal Emergency Management Agency created April 1, 1979 when President Jimmy Carter signed the government department into being. Surrounding the chart and highlighted in blue are today's transiting planets (noon edt), plus, a few of Trump's natal planets such as his 11th house Saturn in Cancer rising on FEMA's 'noon' Ascendant followed by his natal Venus.

The current off-on conjunction of Jupiter and Pluto in Capricorn conjoins the noon chart's Descendant, and FEMA's Pluto Rx @18Lib02 conjoins Trump's natal 2nd house Jupiter Stationary. Rounding up the degree of their Jupiter-Pluto pairing, we have: "19libra" = "A Gang of Robbers in Hiding" which in my opinion relates to the current banditry of N-95 masks and other medical supplies ordered by certain states but "seized" by FEMA (and/or other entities) on behalf of Trump's purloined stash (some say, intended for red states only and/or for selling to foreign buyers--creating profit for Trump?): 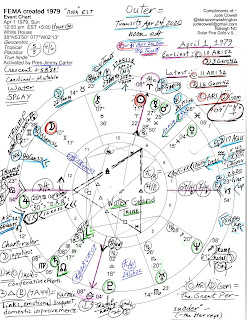 Anyway, be that as it may or may not be, publishing the FEMA Horoscope here makes the (noon) chart available online in case anyone wants to utilize it or follow transits or progressions in the future that affect its planets. Plus, you see the Water Grand Trine which adds a protective vibe to the agency along with protective Jupiter exalted in Moon-ruled Cancer but at a critical 29th degree ("30Cancer" = "A Daughter of the American Revolution") and straining to enter Leo.

And note that the melancholy Moon-Saturn midpoint conjoins the noon Ascendant suggesting 'meetings with sick or depressed people' (Ebertin). Of course, this FEMA does, or is supposed to do.

Well, my work here is almost done but I should add that there are two factors I neglected to pen upon the chart:

Perhaps you remember that a 17 South Solar Eclipse last manifested on March 20, 2015 @29Pisces - another 29th degree - and although 17 South themes sound rather nice, at Spring Equinox 2015 it eclipsed, and its positive themes were interfered with, by a difficult fixed star, Scheat, which is known primarily for its negative potentials of 'misfortune, suffering, suicide, murder, imprisonment, and/or "malevolence of a sublime scope"' (A. Louis).

And the March 20, 2015 Solar Eclipse which triggered "malevolence of a sublime scope"? It's the Prenatal Eclipse of Trump's June 16, 2015 "prez bid" New Moon @25Gemini of malevolence which perfected the very morning the propagandist, with his natal Mars in Leo opposing US natal Moon (We The People--and our Aquarian Moon opposing his Mars), descended the Trump Tower escalator to perform his political charade for a paid-to-be-there audience.

This fellow exists deep in the realms of malevolence! So Let's Never Forget that Trump was born under the cruel influence of a malignant midpoint picture--Mars-Saturn = Pluto with potentials for: "brutality; the rage or fury of destruction; intervening of a higher power; bodily injury or harm; murder, death of many people" (R. Ebertin).

And - more's the pity - the greedy geezer is now in charge of FEMA.