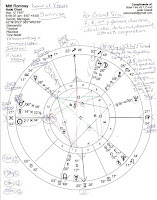 While listening to NPR this morning I learned that some pigs love Oreo cookies, and that Mitt Romney won Iowa's straw poll with 31% of the 14,000 votes cast, as near as their fuzzy math can count.

And while one could say that the lipstick on this pig has been masterfully
applied so far, it's too soon to say whether Romney's brand of charismatic leadership will fly considering his religious heritage and any future problems that may turn up concerning his past.

Where do we see these issues in his natal (sunrise) chart?

One major aspect pattern is the Fixed T-square between Venus opposite Pluto with Chiron (the wound; the blindspot) as apex planet (or planetoid, if you like.)

Chiron is in Scorpio, sign of sex, death, and regeneration and in this Solar or Sunrise chart--good for ego/creative/life purpose information--Chiron is in the mystical 8th house, as are Moon 26Sco08 conjunct moneybags Jupiter 27Sco33. As you know, Scorpio is also the sign of big business and deep pockets.

Chiron in Scorpio shows a need for forgiving the unforgiveable, and adds an occultist flavor to the personality. But if the lower side of Pluto is prominent, a search for pleasure and for power at the cost of others is found.

Born March 12, 1947, Romney is very Piscean which makes him interested in mysticism (perhaps as part of his LDS Church and/or of the unusual groups to which he belongs or associates--and oddly enough, the sign of the fishes seems to birth military generals more often than most people would expect.)

There are several indications of leadership ability in his chart, and of being in contact with the collective unconscious, also a Piscean talent. This is a Watery, intuitive, creative guy, who perhaps is not always aware of his deeper motivations.

The Venus/Pluto opposition gives him charisma and a need to compromise as well as to control. Mom was on the overpowering side and has affected his views of women (anima)...so there may be resentment against females...compliments of mom's obsessive control of little Mitt.

This opposition may result in marriages where role-playing is prominent and shows some confusion with the mythic mother archetype. Control games are typical of this aspect which also is involved in aquiring great wealth--a form of control as well.

Whatever the situation in Romney's relationships, he tends to make excessive demands on partners, and in work situations, strong emotions may interfere with goals. His manipulative Saturn/Pluto conj opposes a detached Venus in AQ...not a good combo for personal relationships perhaps, but may show his money-infused corporate side which is bolstered by Sun conj Cupido, an asteroid relating to family, groups, and corporations.

For the 2008 election, the tr Venus/Pluto midpoint will conj this Solar MC which may mean an affair breaking open to public view. If Romney has any secret fillies or geldings in his stable, he should come clean well before Nov 2008--or this could simply refer to his polygamous heritage.

Relational/values-oriented Venus is linked with another transpersonal planet bwo a trine to Neptune, an imaginative planet of confusion, deception, and veils.

Venus trine Neptune gives a refined nature when it comes to the arts (compliments of mom again), and may tend toward a show of kindness and generosity to others even when they dissappoint. It's helpful with public relations as Neptune gives him a pleasant screen on which to cast an image suitable for entrancing the public.

But negative elements in the environment must be handled by other factors in the chart/nature, for Venus/Neptune trines tend to look the other way. They indicate a need for spiritual development plus, his Venus/Pluto square Chiron shows that sex, death, regeneration, and mysticism play big parts in his nature.

Venus SQ Chiron shows maximum stress between finding a value system that will enhance spirtuality. There may be difficulties in the socialization process and heavy-duty karmic pressure within the sexual realm. (Chiron, Clow, who mentions problems with gender identity--he is cute as a bunny button--to both genders, one imagines!)

But I tend to suppose that this reap-what's-sown karmic sexual stuff comes more from his religious/polygamous background, don't you? But I would since I see heredity where others may see past lives.

Pluto SQ Chiron indicates the Seeker (Chiron) who is conscious of the shape and direction of the archetypal urge to prepare the way and to warn the unwary. He willingly takes on the Quest of struggle against the status quo (uh oh--not another one. This info comes from Richard Nolle's Chiron.)


Let's 'do' the *Sun/Moon personality blend/s...misty, tearful Sun Pis/Moon Sco (but may be ultra-rational in a male) if he was born before 2:34 pm...after that, Moon in Sagittarius...so he's either emotional Water/Water or steamy Water/Fire:

Images for Integration: Longfellow's The Secret of the Sea...Steinbeck's The Grapes of Wrath. (This is Longfellow's and Steinbeck's natal Sun/Mon blend which is shared with Beatle George Harrison, Johnny Cash, Cyrano de Bergerac, and Elizabeth Taylor.)

...endearing naivety; emotionalizes moral issues; misplaced enthusiasms; prone to exaggeration, carelessness, and lack of concentration; 'tries' to be all things to all people (a politician!--so that's 'pretends' to be--jc); grandiosity and self-deception (other useful political traits--jc.)

Images for Integration: A black woman priest in the confessional hears a tale of woe form a white converted scientist, and they fall in love...Einstein's Theory of Relativity. (This is Einstein's natal Sun/Moon blend.)


Romney's Prenatal Eclipse is in the 2 South Series which manifested prior to his birth on Nov 23, 1946, 00Sag50. The **Sabian Symbol for "1Sag" is the one I so often use for Pentagon/war/chickenhawk issues...

pos: accomplishment through the cultivation and preservation of enduring ties with others;

neg/shadow or unconscious side: superficial idleness and unhealthy veneration for the past (Mormonism? Other?--jc.)


From Rose Lineman's Your Prenatal Eclipse, we find that a PE in Sagittarius is associated with the search for ultimate truths (supported by several factors mentioned above--jc), and the gaining of spiritual wisdom.

Motivations stem from moral concepts and/or religious convictions that are holdovers from the past, and which may not be spirtually correct. Karmic endeavors based upon misplaced idealism or misguided beliefs are ineffective, and the resultant exaggerated efforts tend to overshoot the mark. Fake optimism causes underestimation of karmic situations and efforts may fall short.

The Sag PE brings karmic relationships with grandchildren or in-laws, and draws the native toward organized religious practices (which counters the above-mentioned Sun Pis/Moon Sag details. Maybe he has a Scorpio Moon! It would jive with the mother control issues, wouldn't it?)

2 South: feeling that a great deal may be gained by associating with or joining unusual groups.

This Series last manifested Dec 25, 2000 at 4Cap14, and is the same PE Series as Woodrow Wilson, who was a Freemason. And Romney has a 12-degree orb 'conjunction' between Uranus and North Node, an indicator of radical reformist political groups. As you know, Bush has a close conj of rebellious, disruptive Uranus with NN, also in Gemini, sign of the bringer of tidings. "Warning the unwary" indeed.

Well, there's a small portrait of Mitt Romney for you--although somewhat out-of-focus due to an unknown birth time. The portrait does describe charismatic Mitt, but is not as focused as it could be.

However, I have a sneaking suspicion there will be more to add later on about this complex Piscean politician, don't you? So let me know if you find an accurate birth time for him--I'd be interested!

At it again: Check out my recently published content on AC:

Gerry Mander: A Political Poem of Greed and Lust for Power
Posted by Jude Cowell at 11:01 AM