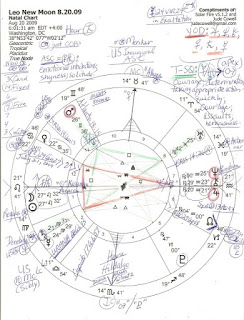 Midheaven (Mc = The Goal/Aspiration Point) 14Tau41 conjunct US Inaugural ASC (Presidential Oath of Office - on January 20s every 4 years at the Capitol Building.)

Highlighted in orange, you can't miss the big honkin' YOD (Finger of God pattern, sextile base pointing to apex planet/s...in this chart it's Jupiter, Chiron, Neptune in AQ) since it kind of overlays the ASC of the New Moon chart here, with Venus/Saturn midpoint at ASC:

YODs signify special tasks, talents from an odd genius, neuroses, turning points, crises that seemingly have no solutions - the cosmos may have to give a hand, and/or adjustments which must be made. A diverging path is indicated, but things can't be rushed. Appropriate to the public discourse, there may be health or medical connotations to a YOD pattern as well.

And on a spiritual level, it's where one picks up the higher thread in order to follow God's will rather than work toward selfish aims at the expense of others...especially when outer (transpersonal) planets are involved in the pattern.

Jupiter/Neptune = ASC: living in an unreal world; speculation; sharing great hopes with others; appearing to live in a world lighted by personal imagination and an emotionally rationalized agenda.

Perfecting during a Saturn Hour, we see emphasised with this New Moon (a new cycle beginning) that Saturn in 2nd house conjs Fixed Star, Denebola, keywords: to go against society; to swim against the mainstream.

Also in 2nd house of Earning Ability is Mercury, Exalted in Virgo 24:29 which sextiles US natal Mercury 24Can+ Rx, making car sales a continued hot tamale - at least for those who seek out the opportunity (sextile.) 'Cars' and 'sales' are both of Mercury's realm; trade issues are on the president's menu.

Highlighted in green is the T-Square configuration between Mercury/Uranus and Mars 26Gem36 (apex) in 11th house of Groups, Associations, Friends, Hopes, Wishes.

These T-Squared energies may signify the recent arrest of the hacker who stole the most credit and debit card details ever (since his last big online heist - he's already in jail) along with two or more accomplices who are represented by Mars in multiple and duplicitous Gemini (Gem = communications; Merc/Uran = computers; Mars = males, and more specifically, Mars = instigators and agents.)

You'll notice that much hinges upon Saturn at the New Moon because the old timekeeper is the one planet involved in both the YOD and the T-Square.

Well, hopefully you can click to enlarge the chart and read a few more details. I don't especially care for this New Moon chart although it is said to be a powerful one as New Moons go. Creative projects should really rev up over the weekend which gives the Moon time to grow in light. Perhaps I'll draw.

And yes, you're right. The crisis situation between the New Moon and the spiritual~health~speculation trio in AQ (Jup, Chir, Nep) is descriptive of the health care 'debate' going on now, and of our health care systems' decrepitude and frauds.

So with a new cycle beginning in spirit-of-endeavor Leo, perhaps around the time of the Full Moon in two weeks, we'll be in sight of a resolution of some sort. Or at least we'll have more details on the bill.

The pressure from the YOD is so extreme, it breaks up the whole system into smithereens, and the legislative process turns into a bigger mush than it is now, if their Political Theater is to be believed. And I always think that most of their rehearsed bluster is 'on purpose', meant to slow things down, or to not pass bills the powers-that-be don't want passed. (Gotta protect that bottom line.)

(Originally about the health care reform efforts, I said that the proof would be whether Congress acts on behalf of the people and accomplishes something practical, or whether reform languishes in willy-nilly-land. Not my original words, but you know what I mean - show me the outcome of all their fine 'debate' - aka, wing-flapping and squawking to establish or maintain pecking order.)

Plus, as you see notated in 12th house, with the Moon's South Node conjunct July 21's Solar Eclipse 29Can27, we're all getting the full treatment now from the Eclipse's 'systems fail; new methods needed' influence.

After all, how many times have you heard or read the word 'system' in the news in recent months?