China's natal chart and why Geithner is there: April 2010 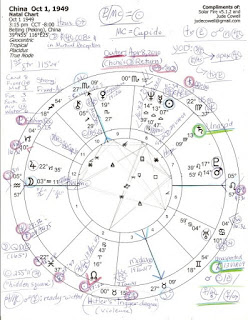 Mike Whitney has written this explaining the real reason behind Treasury Secretary Tim Geithner's current trip to China, a nation with a credit bubble about to burst!

Around the chart and highlighted in red are the planetary positions for early this morning (April 8, 2010), a Lunar Return for the country which emphasizes a midpoint picture from the natal chart, and along with Sun conjunct natal North Node, describes Geithner's visit. Plus, US natal Neptune 22Vir25 - and President Obama's n Mars - sit upon China's 8th house of Shared Resources, Debt, Credit, etc...

Venus/NN = Moon: seeking a cordial and complete understanding with others.

Natally there is a telling midpoint picture with n Sun ('Hero's Journey')...

Pluto/MC = Sun: a desire for power and authority; seeking leadership and notoriety for power; tremendous pride in accomplishments; a rise from obscurity.

But perhaps above all, I must mention China's lonely, unaspected Saturn in Virgo (7th house) representing an isolated, ivory-towered government yet with three midpoints keeping Saturn company and allowing the energies of Saturn to operate through these influences...

Mercury/Mars = Saturn: avoiding discussions about might or force; long-term, loud negotiations; an old argument is debated.

And last, but not least, the April 6, 2010 Pluto Station Rx opposes China's natal Uranus 4Can59 in 5th house (with 6Can04 on 6th cusp, so Uranus affects both houses.) Pluto opposes US natal Jupiter as well, a pessimistic influence which does not favor US finances or politics.

When tr Pluto opposes n Uranus, circumstances involve tremendous conflicts with those with power and resources which are pitted against established financial and political institutions.

China's Pre-Natal Eclipse Series is 5 North: prophetic dreams and hunches; flashes of ideas from the unconscious which may be acted upon (paraphrasing Brady's Predictive Astrology), and since the last manifestation of 5N occurred on May 31, 2003 @ 9Gem19, I suppose that China could have 'seen' or envisioned their current credit bubble coming!

But perhaps that's the point - global financial collapse to pave the way, not just for the New World Order, but for peoples of the world to plead for its quick and thorough implementation.

*The People's Republic of China was formed on November 7, 1931; a later change in government manifested a 'new birth' on Oct 1, 1949. You'll notice that the chart of 1949 has a Midheaven conjunct the natal MC of President Obama; the chart for US Inauguration 2009 shows Jupiter 3AQ32 conjunct China's natal Moon in the US presidency's 10th house; China's natal Uranus conjoins the 3rd cusp in the US Inauguration 2009's chart.

**Mars conjunct Pluto: a police state with rigid military controls; use of suppression and torture for enforcing policy; exporting upheaval and political theory to others as an objective; wars, chaos, mayhem, rape. (Munkasey.)

Midpoint pictures gleaned from Ebertin and Munkasey.
Posted by Jude Cowell at 8:38 AM