With the state of Arizona continuing its drive to propose a secession bill, one may wonder what is really behind such a bullheaded notion which seemingly has no merit in law.

Not having a natal horoscope for the state of Arizona, I'm publishing one for its state capital Phoenix which is based on a new town rising from the site of an ancient Hohokam people irrigation system. Thus Phoenix is a namesake of the mythical, mystical bird. Early pioneers capitalized on the remains of the irrigation system which diverted water from the Salt River for their farming - see horoscope for transformative Chiron Rx in Aries (sign of the pioneer) in 4th house of Foundation/Roots.

Even in 2011, providing water and sewage services are on top of the city's agenda - a 7% rate increase is scheduled to be addressed on February 23rd.

In Astrology, it is always of extra importance when an eclipse falls upon a natal planet or point. Of current interest in AZ's secession issue is the 13 North Series which manifested on January 4, 2011 @ 13Cap38 (our current Solar Eclipse season.)

The January 2011 eclipse conjoined Phoenix's natal South Node 13Cap27 in 2nd house of Values, Worth, and Earning Ability. As you know, the SN is a Saturnian point of separation, aka, the Dragon's Tail. And on its other end (the Dragon's Head) is NN (encounter; karma; destiny) which as you see conjoins US natal Sun (leadership) in tribal Cancer, a solar symbol of our federal government.

Well, there we see Arizona's secession urge in a solar nutshell!

Yet of interest as well is Phoenix's Pre-Natal Eclipse Series (PE): 17 North in n 9th H: 'impulsive, hectic energy; motivations are concerned with financial projects and relationship issues' (Brady.) Last 17N: 1996; next: 2014. Phoenix's PE occurred on July 28, 1870 @ 5Leo06 conjoining US natal NN and was actually the initial eclipse in the 17N Series.

And it would be difficult to miss the high-flying Kite pattern (highlighted in blue, planets listed upper right) which stems out of a prideful, visionary Fire Grand Trine between Saturn in Sagittarius (2nd H), Neptune Rx in Aries (5th H), and Mars in Leo (9th H.) The closed-circuit energy of the Grand Trine channels through the extra point forming and leading the Kite's nose: Sun 27Lib05 in 11th H (government); nebulous, idealistic Neptune, ruler of water, other liquids, and drugs, is the Kite's tail.

Plus, a Sun/Neptune opposition tends to have trouble diagnosing its problems and difficulty correctly understanding them, yet it exhibits defiance toward authority. 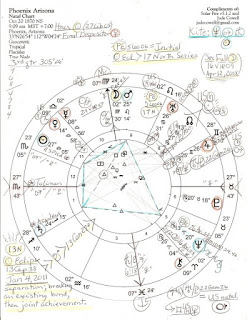 Now as you know, America's natal Mars/Neptune square causes our nation many problems with its 'confused motivations-misdirected energy-action vs apathy-massive military' connotations and for Phoenix the pair poses no less a dilemma. We may see this in a midpoint equation which points directly at US natal Mars in sometimes duplicitous Gemini.

Phoenix's own confused Mars/Neptune midpoint = its natal Uranus/Pluto midpoint of rebellion and revolution which may indicate misdirected rebellion. Plus, Mars/Neptune gives a hint of men (Mars) secreted and/or smuggled (Neptune) over the porous (Neptune) border (Saturn, trining n Mars in 9th H of foreigners and Neptune in 5th H of risk-taking.)

In Politics and Business, *Michael Munkasey gives the Uranus/Pluto combo of energies as: violent upheavals or rioting which bring changes in government. Sounds precisely like the current uprisings across Egypt, doesn't it?

Chart-ruler Mars and co-ruler Pluto, a duo of force, add zeal to the flames.

Then last but not least is Phoenix's expansively active Mars/Jupiter midpoint sitting atop its natal Uranus, that quirky planet of rebellion and freedom...

Perhaps that last should be: 'breaking loose from domination'...of the federal government, some wish.

The above details are without consideration of current transits to Phoenix's natal chart other than the very prominent Solar Eclipse of January 4, 2011 conjunct the Dragon's Tail. And looking ahead, more info may come to light as the Lunar Eclipse of June 15, 2011 emphasizes Phoenix's n Jupiter/Saturn opposition (expansion vs restriction issues) and this natal midpoint picture:

Moon/Neptune = Jupiter 26Gem25 Rx: grand imaginings and plans; far-reaching wishes; enhanced ability to read others' motivations and put them into a political context.

My first thought is that the state government of Arizona may want to read and understand its own motivations first before it continues such an undermining course for the sake of America's future for US sovereignty is the basic issue here. However, the thoughts of its citizens (sans forces intending to create an American Union between Mexico, US, and Canada with its starve state budgets strategy) come way before my own.

Any thoughts on the topic of secession?

*Midpoints: Unleashing the Power of the Planets, Michael Munkasey; any, all, or none may apply and are subject to transits and progressions.

Blog Note: my hearty thanks go to the excellent Crystal Pomeroy of Daykeeper Journal for alerting me to the Arizona secession article linked above. jc
Posted by Jude Cowell at 4:15 PM