That Balcony in Memphis as Mountain Tops Fall

April 4, 2013: with today the 45th anniversary of the assassination of Civil Rights leader Dr. Martin Luther King Jr, here's a horoscope of the gunfire at 6:08 pm CST Memphis, TN, on April 4, 1968. Please click to enlarge the chart image and read a few basic astro-notes I've scribbled messily about. 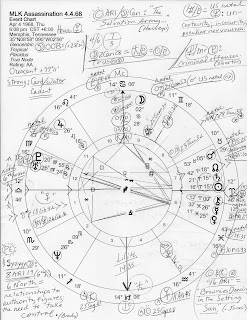 Note: current online sources give a time of '6:01 pm' but the horoscope you see here is from my files of several years ago. 7 minutes difference would change the midpoints at ASC and MC, of course, but I'll simply provide this timeline link and you may do what you wish with the discrepancy. Cusps change by one or two degrees but planets remain in the houses as you see here.

Moon out-of-bounds (OOBs) denotes faulty emotional connections; Hour of Mercury = killed for the rhetorical skills of his inspiring speeches, and for his mercurial plans to unite the Civil Rights and Workers' Rights movements with the Anti-War movement against the Vietnam War. Ascendant 12Lib46 brings up US natal Saturn 14Lib48 (the US government's responsibility?), plus, Dr. king's natal 6th house of Service, Work, and Military. Opposite is his natal 12th cusp of Karma, Self-Undoing, Hospitals, Secret Deals, and Politics which has Aries Point of Recognition on it @00Ari25--where wounding Chiron sat on April 4, 1968 at 6:08 pm CST, Memphis.

More Chiron activity is noted since Mars, the shooter, @5Tau53 in the 7th house of Open enemies, conjoins Dr. King's natal 12th house Chiron @5Tau25, which was stationary (highlighted) at his birth. Natal Chiron can, of course, in its mentor-guru role, relate closely to preaching and teaching, and in Taurus, indicates a crisis over the preservation of values, and to physical body concerns (such as murder, in this case.)

You see the karmic Sun-Saturn conjunction setting in the chart (at Descendant) and considering other chart factors along with his natal horoscope, Dr. King's growing authority and his popularity made him a major threat to the powers behind the throne which guide America's Oval Office. Same goes for Robert F. Kennedy who was assassinated under many of the same planetary signatures but in this chart, Dr. King's Part of Fatality is conjoined by the Sun (leadership) and karmic Saturn, planet of loss and stoppages.

And there's the explosive Uranus-Pluto near-conjunction (exact in 1965--1966 in the range of 16--18 Virgo which includes the critical-crisis degree of 17 Virgo) in the secretive 12th house, but the reason I mention it today is its hit to US natal Neptune @22Vir25 which formed a midpoint picture:

Penned on the chart is a transiting midpoint picture which seems apt for any assassination--Neptune-MC = Pluto (wealthy Mr. Underworld, the assassination orderer): criminal offenses.

Dr. King's first natal planet to rise in the chart is his 8th house Saturn @25Sag21; his opposing 2nd house Mars @21Gem53 Rx conjoins America's natal Mars (July 4, 1776 5:10 pm LMT Philadelphia) which supports the idea that dealing with his natural authority (Saturn) and his Civil Rights activism was top of the assassins' menu. And I suspect that FBI Director J. Edgar Hoover didn't approve of Dr. King or of his motivation for his progressive activities (Mars and Mars.)

1. Venus trine Neptune (0A57) indicating potentials for the expression of charades by masters of disguise, spiritual activities, charitable events, glamorous images, and/or illusions of all kinds.

2. Venus inconjunct Jupiter (1A04) signifies those who have over-expectations of others (like, trusting the wrong person or being 'sold out'?) and victimization in relationships. And since both Venus and Jupiter are money planets, financial problems or inconsistencies are possibly being described here.

3. Venus opposite Uranus (1A12) shows separation issues in relationships, possible extravagance and/or erratic behavior with finances, prejudice in the environment (Ya think?), and values clashing against those of a different background and/or generation.

The one-degree of application relates to one hour--he was pronounced dead about an hour later at 7:05 pm.

Also rising is the Jupiter-Neptune midpoint = ASC: speculation; sharing great hopes with others (Ebertin); an emotionally rationalized agenda (for Dr. King, or for the enemies who had him killed.)

Since my blogging time is brief these days, let's close with some info on the King assassination's steamy Fire-Water blend of Sun Aries-Moon Cancer which were of influence on that day:

Volatile, clannish, devoted, with a mix of independent-dependent, this combo of energies denotes a daring adventurer who can say the right thing at the right time ('apples of gold in pictures of silver'?) Creative and inspirational, Aries-Cancer indicates a charismatic leader who easily catches the imagination of audiences with a dramatic flair.

There is, however, a moodiness that can undermine projects and an oversensitivity that leads to emotional defensiveness; motivating people is a talent and makes space for expressions of convictions about 'what is good for humanity'.

"Images for Integration: The Salvation Army...A lightening storm at sea gives way to a peaceful, radiant dawn...A child in a fit of petulant fury runs away from home."

Chart Note: Around the horoscope you may spy Dr. King's natal planets penned in--that's his natal Pluto (power, manipulation, wealth, transformation, death) near the top (Goal Point = MC) of the chart along with America's natal Sun (the president), Jupiter, and Venus in self-protective Cancer; transiting Moon conjoins US n Venus; Dr. King's natal Sun @25Cap08, is in the 4th house of Endings, and conjoins US natal Pluto @27Cap33 Rx, planet of assassination; two Stars of Egypt, Sirius (the mundane becoming sacred) and Canopus (the great navigator and pathfinder) are also on display at MC.

Now I've never believed the FBI surveillance reports about Dr. King's extracurricular romances though it may be true, for here we find glamorous Lilith at IC and preaching Jupiter Rx in Leo, the sign of romance. Be that as it may, it's obvious that the leadership plans of Dr. King, RFK, and others of their era were not on America's future path intended by the powers behind the throne, and if they'd been allowed to live and lead, things would probably be very different in our nation now.