Such an awkward title for this post! The point is that on the evening the Berlin Wall fell on November 9, 1989, expansive Jupiter, planet of freedom and overstepping of boundaries, was retrograde @10Can38 and so a Jupiter Return to the Wall's chart has been taking place since August 2013. Due to the planet's regression cycle, the three conjunctions of Jupiter to its 1989 natal position are:

For a refresher, you may wish to check out The Rise and Fall of the Berlin Wall.

Well, for one thing, Jupiter's freedom and expansion principles and Saturn's restriction and control principles are once again vying against one another--and the Fall of the Berlin Wall is one of the signposts on 'the march' to a new world order, aka, Global Government, which intends to disrespect all national boundaries since such antiquated concepts are considered old fashioned and past their expiration date.

3.7.14 Update: see The Reverse Berlin Wall? Russia, Ukraine And Markets with 'markets' having a Jupiterian flair.

That the intrigue going on now in Ukraine and Crimea is related to new world order chaos and the establishment of global totalitarianism, I have no doubt. Yet you, dear reader, may retain your doubt if you prefer.

Below, you see the Fall of the Berlin Wall horoscope set for Berlin and for 6:57 pm CET, the time a government official made the announcement that the Wall was now porous and would be opened. According to the details in Campion's World Book of Horoscopes, the official told a journalist that the decision (see powerful Sun-Pluto = Mercury of decisions--'lording it over someone') was effective "immediately" which was actually not their intention. The people were stunned and exalted at the prospect of being allowed to see family members they'd not seen in 28 years.

Soon crowds gathered at checkpoints along the 100-mile Wall but the guards had not yet been alerted about the change. The first entrance/exit to open was the Bornholmer Strasse Checkpoint at 8:15 pm CET and a horoscope for that moment is relevant as well. Another interesting horoscope is that for 'just after midnight' of August 13, 1961 near a *Jupiter-Saturn conjunction in Capricorn when the Wall was first erected as most Berliners slept. That must have been a true nightmare to wake up to since whatever side, East or West, they'd gone to sleep on, there they remained for decades with the emotional and financial depression the government caused: 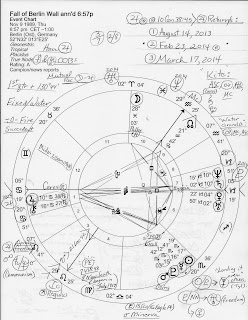 November 9, 1989 6:57 pm CET Berlin Germany; Hour of Jupiter which is Rx and rising along with Chiron @16Can27 Rx; ASC 5Can19 (which is America's natal Jupiter position--hmmm...?); chart-ruler is the Moon in merge-loving Pisces which makes two major applying aspects which show upcoming tendencies: a square to independence-loving Uranus @2Cap50 in the house of Work and Health (2A08) and a second square to Venus @4Cap22, also in the 6th house of Police, Military, and Daily Rounds which were now curtailed and restricted.

Moon square Uranus indicates understandably that emotional outbursts and erratic behavior ensued along with feelings of restlessness and, by some, a defiance of authority. (Tap or click the first link above about the Wall's history for details on attempts to scale the barricade.) Moon square Uranus is the 'born fighter for equal rights' aspect (Pelletier).

Moon (the people) square Venus, a money planet of relationships, values, and beauty, denotes deep ties with the past, guilt about letting loved ones down (unavoidable under the circumstances), and rebellion against restriction in relationships. This aspect also describes the sad loss of good-paying jobs in West Berlin by those stuck on the Eastern side where economics weren't so rosy.

So with transiting Jupiter again reaching 10Can38, its freedom and venturing across boundaries implications are being played out, this time by Russian troops invading Ukraine and Crimea--though some people think that the US has stirred up conflict in the region as President Putin has asserted. In light of the globalists' austere new world order agenda to take over the world and the decades of misuse of the American military in the role of 'world cop'--plus, the foreign intrigues of the CIA, the US involvement theory is quite easy to believe or at least, easy to not discount all together.

As you see in the chart, the significator for Communism, the Saturn-Neptune conjunction @10Cap+, is now conjoined by wealthy, stealthy Pluto which simultaneously opposes the Wall's Jupiter in Cancer. So in the 1989 chart, it looks like happy Jupiter (freedom) in home-loving Cancer is opposed by Communism's depressive Saturn-Neptune on 'the other side'--of the Berlin Wall. Can we agree on that?

Therefore, if the events of 1989 and 2014 are related on a level or two, the third conjunction of freedom-lover Jupiter, the General and the Explorer, to its 1989 position on or around March 17, 2014 may bring resolution to the Ukraine-Crimea stand off between America, the EU, and Russia, if not before. At least, that's my best guess and my fervent hope!

*The Jupiter-Saturn conjunction exact @25Cap12 on February 19, 1961: freedom/expansion and restriction/control mush together; the 'societal planets conjoined again three times in 1980/81 @4--10 Libra, and again on May 28, 2000 @22Tau43. The Berlin Wall disintegrated on November 9, 1989 during their opposition phase 28 years after it was erected to keep in fleeing East Berliners so that Communism would appear better than it can ever actually be.

And I type that even though Capitalism is the flip side of Communism.

Here's a view of Vladimir Putin's birth horoscope (RR: C for accuracy in question) in case you desire a gander.

Blog Note: if you scroll the sidebar of this blog to the Search field and type in Russia, Crimea, Putin, or other related topics you should get a list of previous posts--there are natal horoscopes for Russia, Ukraine, and Crimea around here someplace! jc