Image: Natal Horoscope for Crimea: May 5, 1992 16:00 GMT Simferopol, Russia; Hour of the Moon; Moon (the people) out-of-bounds @22Gem53 in 8th house denoting separation between the people and the country's leadership especially in the area of Shared Resources: 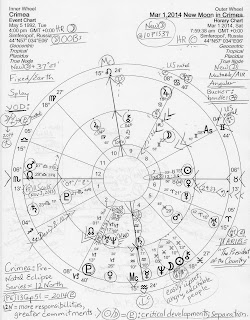 Since I'm having tech problems here I'll quickly post this chart and hope you can enlarge to read my notes written thereupon. The Ukrainian Republic of Crimea began moving toward independence on June 28, 1991 when Crimean Tatars in Simferopol declared sovereignty. Previously an autonomous region within the Ukraine and not a state, the Crimean Parliament approved their independence on September 5, 1991 and this act "allowed for a proclamation of independence but was not used, being kept in reserve for future use. The only indication of time points to around 5:00 pm BST..." (Campion's Book of World Horoscopes.)

I have italicized 'being kept in reserve' because I think it partially describes the out-of-bounds (OOBs) condition of the people's Gemini Moon which implies separation or isolation since the Moon is the only OOBs planet in the natal chart. You will also note that the current position of transformative, destructuring Pluto @13Cap04 in Crimea's natal 3rd house is triggering Crimea's Pre-Natal Eclipse Saros Series, the 12 North with its themes of 'more responsibilities' and 'making greater commitments' (Brady.)

You will also note that the current news from the region being touted in the US is that Ukraine is divided between Russian influence and that of the European Union. Perhaps the Ukrainian people feel divided on such issues with natal Moon in dualistic Gemini. However, it does seem that there's a lot more than meets the eye in the Ukraine-Crimea-Russia-EU-US situation than this.

Astrologically, Pluto in bossy Capricorn also represents the wealth and power of the World Bank and the IMF, organizations which stand to make huge profits from a Western-based outcome to this tense quarrel which some believe has been instigated by the US government and others.

Personally, my suspicion is that President Putin and the other presidents involved are reading from the typical new world order/global government script--and there in the chart/s above is anarchist, disruptor, and revolutionist Uranus at '11Aries', "The President of the Country" degree in the Sabian Symbols.

Well, many sneaky things ten to occur during a New Moon and the Dark of the Moon in the previous hours to its perfection. How appropriate that the March 1, 2014 New Moon degree of '11Pisces' has this symbol: "Men Seeking Illumination" which is part of what the new world order duo, Uranus and Neptune, stand for, plus tellingly, their Great Conjunction/s of 1993 at or near '18Cap' = "POLITICAL POWER"..."smug or strong-armed paternalism" (Jones) fits the actions now being taken in Crimea, Ukraine, Venezuela, and across the globe.

To the best of our abilities, it is obvious that everyone must prepare for the time when transiting Pluto reaches that degree area of the Zodiac (18-20Cap) for the midpoint picture of Uranus-Neptune = tr Pluto threatens calamities, loss, and abandonment of resistance to what must be Pluto's Great Plan--global government--which in reality is already upon us if we allow Pluto a 5-degree orb from 13Cap to 18Cap.